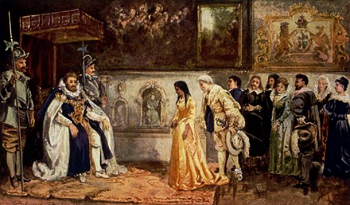 The Standard Royal Court is a staple setting of historical and Speculative Fiction, the natural home of good kings, Evil Chancellors (as well as some good ones), and every breed of aristocrat. Usually, it is loosely based on an idealized version of the medieval European model, with minor variations to fit the setting, which is more plausible than it may seem. Feudalism, in the narrow technical sense, only occurred in western Europe, but recognizably similar systems have developed throughout history, whenever and wherever the central government was too weak to function (or, as was more often the case, just plain gone.) The courts of Ancient Egypt and medieval Japan are recognizably variants of the same theme.

How elaborate the court is will depend on the technology level, the wealth of the nation it rules, and the image the ruler wishes to convey. A barbarian warlord will have the most basic version: one right-hand man, a dozen minor chiefs, and a few hundred warriors. A galactic empire will have a court bigger than most cities, and a population to match—ten million courtiers living in conditions of unparalleled magnificence, their lives all revolving around the center of power, the emperor at the court's heart. If, that is, the writer wants to keep in touch with reality. Total mismatches between the size of the court and the size of the country occur, and often without causing administrative problems (if the court is too small) or financial ones (if the court is too large).

Any court beyond the most basic will typically be fractal in structure. Most of the courtiers will themselves be the heads of lesser courts, mirroring the structure of the main court, and many of their courtiers will in turn head minor courts. Thus, the crown prince's best friend and chief advisor might be a duke, ruling over several earldoms, advised by the ducal chancellor. Historically, most courts stopped at four or five tiers, but in fiction there is no limit, especially in fiction where feudal regimes govern whole galaxies.

In general, the overall tone of a court is set by its ruler. A good king will have good courtiers, an evil king will have evil courtiers. However, there will usually be one or two courtiers who run counter to the trend, which gives them a greater prominence in the plot, and a new king may inherit a court that runs opposite to his preferences.

Morality is only one dimension along which the Standard Royal Court varies. Others include:

The Decadent Court falls in one corner of this space. All these dimensions are loosely correlated with the age of a court. A newly established kingdom will generally have a simple court. A millennia-old imperial court will usually be decadent, and encrusted with many layers of meaningless ritual.

Positions in a royal court usually start out as purely functional, become either hereditary or reserved for nobles, and end up as purely ceremonial, with the actual work being done by the holder of a more junior post, which may then go through the same cycle. This is how old courts, where this has happened several times, end up with their bewildering array of titles. Young courts, with no long standing traditions, are much simpler, and the nobles in them more likely to do actual work.

The members of a Standard Royal Court can be classified by their closeness to the center of power. The monarch, of course, is right at the center. The inner circle of courtiers has one or two people from each power bloc within the court, and directly advises the monarch. The outer circles of courtiers spend their time trying to get into the inner circle. The part-time courtiers have a recognized place in the court, but spend most of their time away from it. At the bottom of the pile, the servants keep the whole place running.

The important members of the court, and associated tropes, are:

Many of these people will have their own circle of courtiers filling the same roles, but their titles will be lesser. Though the stakes are lower, the politics is no less vicious.