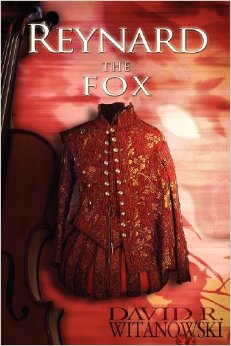 The fiddler was late . . .
Advertisement:

The Reynard Cycle is a series of Low Fantasy adventure novels by David R. Witanowski based on the medieval Beast Fable of the same name, but featuring human beings rather than animals. Reynard begins the story as a Loveable Rogue who steals from the rich and . . . pockets the loot. All is well and good, but then he sets his sights on robbing the beautiful Countess Persephone and Hilarity Ensues, sometimes more realistically than the reader might initially expect. The tone of the series is deeply seated in Grey-and-Gray Morality, and occasionally borders on outright Horror whenever the more fantastical elements of the books rear their ugly heads, but in general it stays true to its Swashbuckler roots. You can expect at least one Duel to the Death per book.

The current entries in the series:

"The Reynard Cycle" contains examples of: