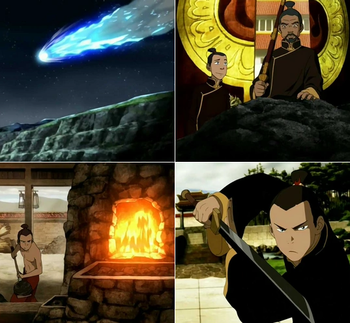 Swordsmith: The metal is amazing. I have never seen its like before.
Shredder: Nor will you ever again. Let us just say the metal — fell from the heavens.
— Teenage Mutant Ninja Turtles (2003)
Advertisement:

Meteoric metal carries inherent significance. Anything made out of it will be some combination of magical, good, evil, or just incredibly strong.

Crafting meteoric iron is Older Than Dirt: iron from meteorites has been used to make tools and weapons since the Ice Age, when it was the only iron available. The trope that it is special or magical isn't documented from that long ago, but some scholars believe that the Older Than Feudalism story of the forging of Zeus's thunderbolts refers to meteoric iron. Anyone with academic journal access can read more about this here

This trope can also be Truth in Television. Real-life meteoric iron

is one of the few natural sources of metallic iron (as opposed to iron ore). Because medieval smelting technology was unable to remove many of the impurities found in iron ore, meteoric iron weapons could be made much stronger than the more common ore-based ones. Meteors also happen to be a main source of iridium

, an extremely hard and dense metal usually only found as an impurity of platinum. See the Real Life examples below for more.

In the modern day, this trope appears most frequently in literary fantasy. In many works, from The Silmarillion to Avatar: The Last Airbender, meteoric iron is depicted as a black metal (though whether this is the color of the metal or a surface layer is not always specified), causing overlap with Black Swords Are Better.

Subtrope of Fantasy Metals. See also Unobtanium, which it often is, and Magic Meteor. May be interchangeable with Cold Iron or a separate kind of Depleted Phlebotinum Shells. See Hihi'irokane for its Japanese counterpart.