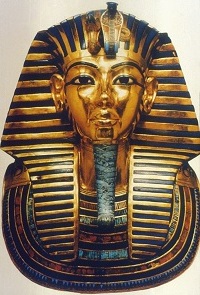 King Tut's death mask
"Honestly, the only reason King Tut is famous is that most Pharaohs had their graves robbed by ancient people, and King Tut had his grave robbed by 20th-century British people."
—John Green, Crash Course
Advertisement:

Tutankhamun (originally "Tutankhaten") was an 18th Dynasty Pharaoh of the Egyptian New Kingdom most famous for his luxurious tomb, which was discovered by Howard Carter in 1922. As an actual Pharaoh, his successes are debatable: since he came to the throne aged about nine, how much of his actions were his, and how much were those of his officials? He died at 18 or 19, after only 9-10 years of rule, so he didn't have time to do all that much himself.

Tutankhamun came to power after a brief and confused interregnum under two ephemeral pharaohs, Smenkhkara and Neferneferuaten — or possibly Neferneferuaten and Smenkhkara — who were the immediate successors of the Heretic Pharaoh Akhenaten. Tutankhamun's Restoration Stela proclaims how he returned the old gods to Egypt and put things right again. He (nominally) moved the capital back to Thebes (his court and government were actually in Memphis), restored temples, had a few wars,note Which is why his court was based in Memphis—the wars were in Syria and Canaan, so Memphis was a better place to run them from and then died without (surviving)note The mummies of two stillborn girls—one a few months premature, one at or very nearly at term—believed to be his daughters were found in the treasury of his tomb. issue.

It's been shown through modern investigations that he probably wasn't killed by his vizier, Ay, but a lot of media likes to claim he was anyway. He was probably killed by an infection arising from an injury he got in a chariot accident while hunting, to which he might have been more susceptible because of an earlier bout of malaria (which tends to weaken the immune system). He seems to have had some significant health problems; there’s speculation that he had temporal lobe epilepsy. He definitely had a cleft palate, which probably affected his speech. He also seems to have had some foot deformities that affected his ability to walk; he was buried with several walking sticks that appear to have seen regular use, and most depictions showing him standing or walking (as opposed to sitting or in a chariot) show him using one.

For all that, he appears to have been something of an active young king, albeit hardly a policymaker. Most scholars agree that he was partaking in the religious ritual roles of the king for much if not most of his reign. After all, a ten-year-old is more than capable of chanting and making appropriate gestures when prompted. And it wouldn't be unprecedented within Egyptian history; his probable grandfather Amenhotep III appears to have done the same thing, presiding over the funeral of his father Thutmose IV at about the same age. Tutankhamen also seems to have enjoyed driving chariots (the sports cars of the day) and hunting (preferably from his chariot).note Weirdly, one gets the impression that Tutankhamun would've been right at home among the class of interwar British gentleman-adventurers who discovered his tomb. Rich teenager with an impeccable pedigree, a speech impediment, and a limp who nonetheless loves to shoot ducks and drive around at insane speeds in a sports car? Indeed, preferably shoot ducks while driving around at insane speeds in a sports car? And did we mention that he grew up in an absurdly splendid palace his father—or something—built in a hilariously unlikely spot? Can you get more Roaring Twenties Britain? And all the while he's attended by hypercompetent servants who might or might not have their own agendas. Wouldn't this guy fit right into a P. G. Wodehouse novel? (Or more darkly, as the victim in an Agatha Christie murder mystery?) He may have had some battlefield experience against human enemies as well—armor found in his tomb that was clearly made to fit his body also had distinctive damage suggesting use in a real war. Thus one of the great what-ifs of the era is, assuming he was physically healthy enough to rule actively and didn’t die young, whether he would have taken more direct control over policy in his 20s (like his predecessors Thutmose III and Amenhotep III) or continued to be a creature of his ministers.

The discovery of his tomb in 1922 was massive, worldwide news, because unlike other tombs of the pharaohs (or indeed of other Egyptian nobles), most of which had been cleaned out by (roughly) contemporary graverobbers, his was largely intact. Indeed, it is the most intact ancient Egyptian royal burial known today.note It is not, however, the most intact ancient Egyptian burial; that title goes to TT 8, the tomb of Kha and Merit, a noble couple (Kha appears to have been an architect/project manager for tombs) who lived during the reigns of Tutankhamun's predecessors (and probable ancestors) Amunhotep II, Thutmose IV, and Amunhotep III. If Tutankhamun's tomb is 95% intact, TT 8 is 100% intact—it shows no signs of being robbed whatsoever. It does seem that Tutankhamun's was robbed twice, but both times within a matter of months after his death, and by robbers who only had time to take a few small-but-probably-valuable items. As a result, his tomb was resealed permanently with most of the treasure still intact (if in some disarray after the theft). Shortly thereafter, it seems that one of the rainstorms that occasionally strike Thebes came and (as usually happens) flooded the Valley of the Kings; as Tutankhamun's tomb has an entrance near the valley floor, the sediment carried by the floodwaters built up over the tomb entrance, hiding it from view for the next 3,200 years.

He is the only Pharaoh popularly known by a nickname: King Tut.

Appearances and references in works of fiction: