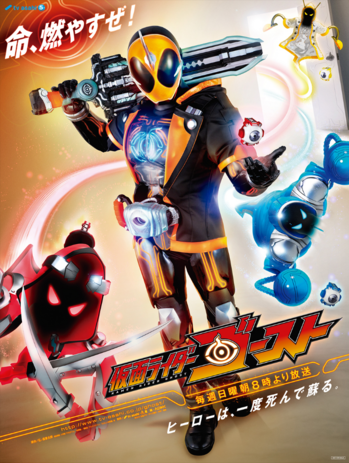 My life will burn bright!
Eyecon, open your eye!
Advertisement:

Kamen Rider Ghost is the 2015-2016 Kamen Rider series; the seventeenth entry in the franchise's Heisei era and the twenty-sixth series overall.

Takeru Tenkuji is a young man who dreams of following in his late father's footsteps and becoming a heroic ghost hunter. When he is mailed a mysterious artifact on his eighteenth birthday, supposedly from his father, Takeru suddenly gains the ability to perceive spectral monsters known as "Gamma". But even as he moves to defend his friends from the Gamma, he is cut down without mercy and dies.

Despite this, all is not lost! Takeru's soul becomes stored within the artifact (called an "Eyecon") and he is restored to un-life as a ghost under the condition that he fight against the Gamma over the scattered Eyecons. If Takeru is able to gather fifteen Eyecons, each containing the brilliant soul of a great historical figure, then he can use their combined power to grant any wish he desires, even being brought back to life.

To help him succeed, Takeru receives a Ghost Driver through which he can channel the power of the Eyecons and transform into Kamen Rider Ghost. By setting different Eyecons within the belt, Takeru can access the skills and abilities of famous historical figures such as the swordsmanship of Miyamoto Musashi or the innovation of Thomas Edison. But Takeru only has ninety-nine days to obtain the Eyecons he needs before his new un-life runs out and he fades away permanently.

Takeru Tenkuji (Kamen Rider Ghost), with the power of the Grateful Damashii, is able to finish off an opponent with a Rider Kick imbued with the power of all fifteen of the Parka Ghosts from the Heroic Eyecons.

Example of:
All Your Powers Combined

Takeru Tenkuji (Kamen Rider Ghost), with the power of the Grateful Damashii, is able to finish off an opponent with a Rider Kick imbued with the power of all fifteen of the Parka Ghosts from the Heroic Eyecons.