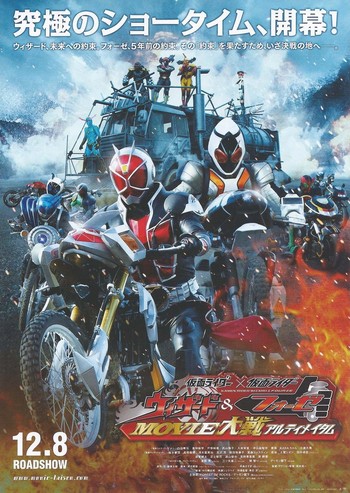 Kamen Rider × Kamen Rider Wizard & Fourze: Movie War Ultimatum is one in the Kamen Rider series' staple Movie War movies. It premiered in Japanese theaters on December 8, 2012. Like preceding Movie War films, it's split into three parts, linked together by the Akumaizers, a trio of villains plotting to take revenge on humanity for being banished to the Underworld.

The Fourze section focuses on the Space Kamen Rider Club five years after the end of Fourze (which is also five years forwards from the rest of this movie) trying to stop a new Zodiart from exploiting children with psychic abilities to charge the "Zeber", a power amplifying device. They also have to contend with the Monster Leaguenote Monster Alliance/Kaijin Alliance/Kaijin Dōmei, a group of psychic children supported by the new Hercules Zodiart who desire psychic domination of humanity and have chosen to destroy the vessels containing astronauts returning from the International Space Station to make a statement of the importance of Earth's problems over space exploration. The Akumaizers time travel to this period, intending on taking the Zeber back to the present day as part of their plan to infinitely generate monsters.

The Wizard section focuses on Haruto, Rinko and Shunpei as they enter into the Underworld through the mind of a Gate, Yu Kamimura. They find themselves in a "Groundhog Day" Loop where everyone is enamored with the mysterious heroine, Bishoujo Kamen Poitrine. In order to escape from the Underworld and rescue the Gates that the Akumaizers are using to spawn monsters, Haruto has to convince Poitrine to abandon her dream world.

The Fourze and Wizard section has Wizard, Fourze & co. take on the Akumaizers and save the world with the help of OOO, Birth, W and Accel.