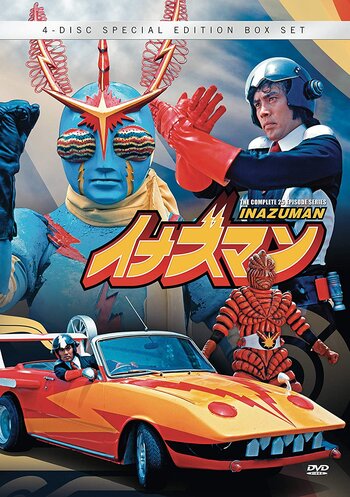 As Goro Watari and his friend Gosaku Marume are walking home from college classes one evening, they discover two children being attacked by evil mutants. After saving the kids, Watari discovers that the kids are part of the Youth League and were attacked by soldiers from the Neo-Human Empire. After being taken in by the Youth League, it is discovered Goro is a very powerful mutant and, after having his powers awakened by the Youth League, Goro becomes able to transform into Sanagiman. Not only that, when "Sanagiman matures, his belt reaches maximum and he becomes Inazuman!"

With his new powers, which include the ability to teleport, turn his scarf into a giant chain, and the "Supreme Lightning Strike that finishes off his opponents, Inazuman battles Emperor Bamba, the head of the Neo-Human Empire, and his hoard of monsters.

The first television series ran from October 2, 1973 to March 26, 1974 with a total of 25 episodes, concluding with a two-part finale that led into the beginning of the sequel series, Inazuman Flash (イナズマンフラッシュ, Inazuman Furasshu), which aired in 1974 from April 9 to September 24 with a total of 23 episodes.

A manga adaptation by Shotaro Ishinomori was also serialized from 1973 to 1974.

After fighting Emperor Banba to the death, Goro Watari finds he has a new foe in the Despar Army.

After fighting Emperor Banba to the death, Goro Watari finds he has a new foe in the Despar Army.