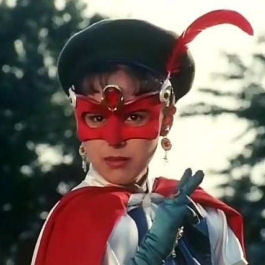 Bishoujo Kamen Poitrine is a Shoujo toku series running from January to December 1990. It was the 11th entry in the Toei Fushigi Comedy Series franchise. As one of a number of shoujo series created by Shotaro Ishinomori, it stood out by being parodied and referenced many times later on. It's also one of the few heroines in the franchise to be included in Toei's official superheroes list.

Yuko Murakami is an Ordinary High-School Student who goes to a Shinto shrine to pray one day. She knocks down the bell in front of the shrine when she rings it, and awakens Kami-sama, or God himself, who bestows upon Yuko the power to become a fighter for justice, a Super Hero, as Bishoujo Kamen Poitrine. She fights all kinds of villains who want to make life hard for children.