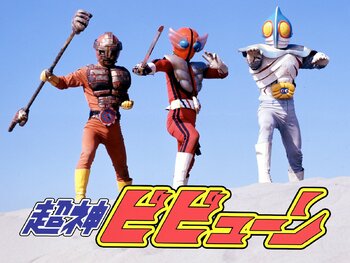 Zun-zun zun-zun zun-zun zun-zun Bibyūn!
Choujin Bibyun (超神ビビューン Chōjin Bibyūn, lit. "Super-God Bibyun") is a Toku television series created by Shotaro Ishinomori and produced by Toei Company. It serves as the Sequel Series to Akumaizer 3 and is notable for using rejected Kamen Rider designs for each of its heroes. As it follows up on a particularly critical plot point in the final episode of Akumaizer 3, spoilers for Akumaizer 3 will be unmarked below.
Advertisement:

After our three swashbuckling demon heroes performed a Heroic Sacrifice in the Final Battle with the Akuma Clan, their souls drifted in three capsules that eventually found the bodies of three humans. When Youkai suddenly appear in place of the Akuma Clan to terrorize humanity, a student-athlete named Kei Tsukimura has a chance encounter with Daizaburo Daima, head of the Daima Choujin Research Center, as he's being attacked by Youkai and discovers he is the inheritor of the spirit of Xavitan. After Daima performs a ritual to awaken the power of Xavitan within Kei, Kei becomes Choujin Bibyun and joins with Ichiro Suga and Go Watabe - who inherited the powers of Evil and Gabra respectively - to form the Choujins to defend humanity from the Youkai.

It is currently one of the shows available on Toei's Tokusatsu World YouTube channel. The first episode can be viewed here