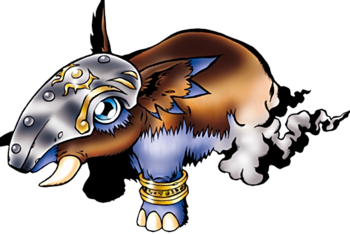 It's a cute pet and a living dream catcher for the price of one! And this one can fit in your laptop!
"...by the Edo period the baku has become a full-fledged devourer of nightmares, a guardian creature charged with protecting the vulnerable sleeper as he or she ventured into the other world of dreams. For this purpose, an image of a baku might be placed near the pillow at night. There were even pillows made in the shape of baku."
— The Book of Yokai: Mysterious Creatures of Japanese Folklore
Advertisement:

The baku has the body of a bear, the head of an elephant, the ears and eyes of a rhinoceros, the tail of an ox, and the legs of a tiger, having believed to have been made from the leftover body parts after the gods finished creating all of the other animals. Since its name refers both to the dream-eating creature and the Real Life Malayan tapir, modern iterations of the baku often give it a tapir-like appearance. This is because when the first Malayan tapirs were brought over to Japan, people believed them to be live baku due to the uncanny resemblance between the animal and the mythical creature.

Despite their grotesque appearance, the Baku is seen as a welcomed, benevolent youkai because they devour malevolent spirits and Peeve Goblins that are believed to be the cause of nightmares, similar to dream-catchers and gargoyles in other cultures. Children would sing "Baku-san, come eat my dream" three times to ask the baku to cure them of their nightmares, but if they did so frivolously, it would go on to eat their hopes and good dreams as well.

See also Dream Stealer. Sub-Trope to Youkai. No relation to the capital of Azerbaijan, the alien race from Star Trek: Insurrection, or the Pig Man character from Final Fantasy IX.