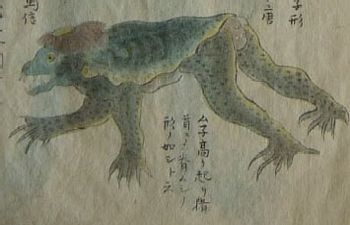 "Kappa are mischievous and sometimes deadly, notorious for pulling horses and cattle into the water; they have also been known to drown young children and extract their internal organs through their anuses."
— The Book of Yokai: Mysterious Creatures of Japanese Folklore
Advertisement:

Kappa is a Greek letter, as well as a type of Indian tapioca dish. But this article isn't about those kinds of kappa.

There are thousands of Youkai in Japanese mythology... but one of them is far more popular with the public than the others. The Kappanote meaning "river child(ren)" is a river-dwelling creature of Japanese folklore. It is often depicted in Anime and modern media as an anthropomorphic turtle with a domed head and a ring of spiky hairs sticking out from it.

In Japanese myth, the kappa is a river-dwelling spirit who likes to eat human entrails and blood. It has a deep bowl-like depression in its head that is full of water, which is the source of its power. That bowl is surrounded by scraggly hair (transformed into the "spikes" of the modern incarnations by the Anime Hair phenomenon). Those confronted with imminent devouring by a Kappa are advised to take two courses of action: The first, and most preferable, is to give the kappa a cucumber, inscribed with one's name in some tellings. The cucumber is the Trademark Favorite Food of the kappa, and a kappa so bribed will spare the giver. It may even befriend the human for the tasty gift. The other action: Bow to the kappa. Kappa are extremely polite, and will always bow too. Bowing will cause the water to fall out of their bowl, weakening them and allowing you to escape. In any case, don't bother trying to fight them, as they love sumo wrestling.

Kappa have undergone a bit of Disneyfication that bowdlerizes out their gruesome aggression and strict need for water in their bowl. It is a necessity of and to their immense popularity, courtesy of which they pop up in a lot of Japanese works for many different audiences. Even those works that aren't explicitly mythological like to throw in a kappa or two. While the kappa hasn't reached the same level of popularity elsewhere, Pop-Cultural Osmosis from anime means that Western works sometimes do feature one.

There are many different regional names for the kappa, and appearance varies considerably between regions as well. Notable examples include the hyousube (bald, hairy, gibbon-like creatures which like eggplants), and kawatengu (literally "river tengu", with the ability to create fire). The mizuchi is depicted as a kappa in some regions, but in older sources appears as a shapeshifting river dragon.

Creatures in other regions similar to kappa include the Chinese Shui Gui ("water monkeys"), as well as the Phillipino Siyokoy

(a monstrous type of goblin-like merfolk which is also said to kidnap and eat children that walk nearby the rivers it lives in). The third disciple of Tripitaka, Sha Gojyo, in Journey to the West is often represented as a kappa, though the actual tales depict him more as a river-dwelling oni (and in the original Chinese version, it was a river of sand).

Not to be confused with a rather famous Twitch emoticon

.note As 2019, this "kappa" is very popular in German youth slang, meaning "idiot". Nor with the Web Comic Kappa

, although it does feature anthropomorphic sea creatures, including the eponymous fish-boy. Sister trope of Our Goblins Are Different.

Gaijin Goomba (both the real person and his cartoon goomba counterpart) explain to the viewers just what the Kappa is.

Gaijin Goomba (both the real person and his cartoon goomba counterpart) explain to the viewers just what the Kappa is.