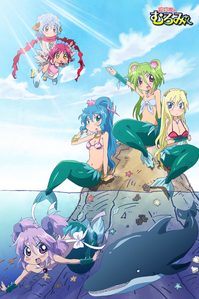 Takurou Mukoujima is your ordinary High School boy who likes to go fishing at the pier in the afternoon. One day, he accidentally catches a green-haired mermaid named Muromi, and an unlikely friendship between the two begins.

Muromi-san (Namiuchigiwa no Muromi-san, lit. Muromi of the Shore) is a gag manga by Najima Keiji serialized in Shonen Magazine Comics. It received a thirteen-episode anime adaptation which aired on April 6th of 2013 with twelve minutes length per episode. Now available for viewing at Crunchyroll