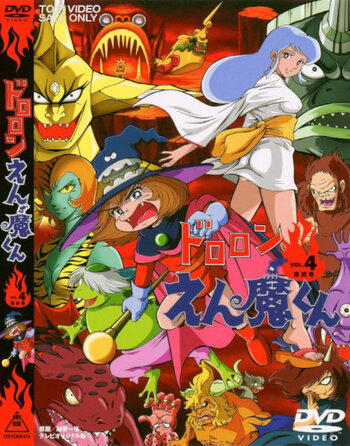 Dororon, Dororon Dero Deroba, Dororon, Dororon Dero Deroba
Dororon Enma-kun is a manga series created by famed manga artist Go Nagai. It was first published in Shogakukan's Weekly Shonen Sunday on September 1973 and ran through March 1974, but it has seen myriad of adaptations and remakes over the years, each with varying focuses on the franchise's comedy, horror, ecchi, and suspense elements.
Advertisement:

Enma is the nephew of the king of hell (also named Enma). Due to him being somewhat of a handful, Enma is sent to the human world to capture youkai that have escaped hell and are causing problems. Following him is Chapeau-jii, a sentient witch's hat with an encyclopedic knowledge of youkai, Yukiko-Hime, a snow-woman princess and Enma's love interest, and Kappaeru, a kappa and Enma's best friend.

Joining them on their quest is Tsutomu-kun and Harumi-chan, two humans from the school Enma makes his base under (which one joins first depends on which version of the story you're reading/watching). Together, they make up the Demon Patrol, and work at protecting the town from youkai, sexually harassing Yukiko, and... well, that's about it, really.

The series is particularly notable because it was Go Nagai's first attempt at a children's manga after almost single-handedly bootstrapping the Ecchi subgenre of comedy manga in Japan with Harenchi Gakuen — having said that, it is also a bit of Values Dissonance to western sensibilities: the nudity and sexuality in the series is blatant, especially in the more modern remakes, and Enma is a very unrepentant, perverted Anti-Hero. (Except the original 1973 anime which was an attempt by Toei to make a true series for kids.)

The original 1973-1974 anime series aired originally on Fuji TV and was later rerun on TV Tokyo in the 1980s. Over the 40 years that Enma-kun has existed there have been a number of remakes, spin offs, and parodies. For example, in 2000, Go Nagai did a parody spinoff, Dororon Enpi-Chan (どろろん艶靡ちゃん), with a gender-bent cast and the sexuality turned up to 11 — notable because the main female lead, Enpi-chan (a sort of cross between Nagai's Kekko Kamen and Enma) is a reoccurring character in the most recent animated version.

In 2006, it would get a sequel/remake in Demon Prince Enma, which dropped the comedy and became a full-fledged suspense-horror series. After the OVA was released, another manga version was released called Satanikus ENMA Kerberos by Eiji Toriyama, as well as a new series, Enma Vs Dororon Enma Kun Gaiden, which was a surprise crossover with Honey Kisaragi.

For the 2011 anime adapatation, see Ghastly Prince Enma: Burning Up.

Tropes appearing in the original ('70s) anime and manga: