Literature / Harry Potter and the Prisoner of Azkaban 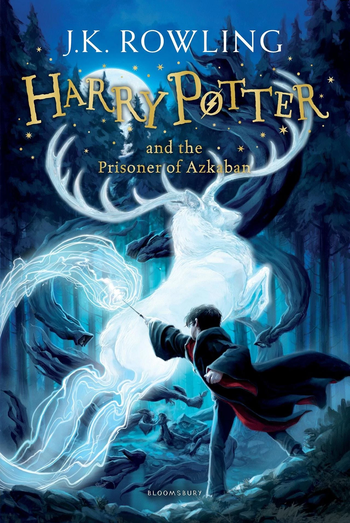 Sirius Black has escaped from Azkaban, the wizarding prison. In response, the Ministry of Magic sends Dementors, a Black Cloaked race of dreadful creatures who guard Azkaban, to guard Hogwarts and their Emotion Eating powers seem to affect Harry especially. Remus Lupin, meanwhile, makes his first appearance, taking on the dreaded Defence Against the Dark Arts post.

The book's popularity may be partially due to the introductions of Sirius and Lupin, whom some fans consider to be two of the coolest characters in the series. It also marks the point where the books started to become more serialized with each ending setting up the next one (the first two books were largely self-contained stories whose events did not significantly influence the progression of the series' overarching plot). It also has, quite possibly, the most complicated plot of the entire series, drawing in characters and events from all over the place; the Prisoner of Azkaban is obviously important, but the way he is important zig-zags several times over the course of the novel, and the same thing happens to a lot of other characters. The result is that, by the end of this book, the story's landscape has irrevocably changed ... and readers know that things are going to get really interesting from now on.

Followed by Harry's fourth year at Hogwarts, in Harry Potter and the Goblet of Fire. The film adaptation was released in 2004.

I solemnly swear that these tropes are up to no good: