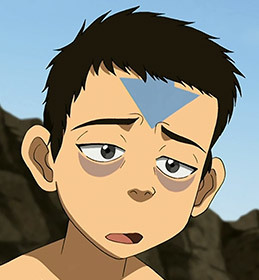 Aang packs his bags for the Final Battle.
Advertisement:

Often used to show a character is tired to the bone after pulling an all-nighter are the Exhausted Eye Bags. These are circles of darker skin color than normal underneath the character's eyes to represent the Real Life phenomena of pigmentation that occurs around a person's eyes when they are physically exhausted, though in reality it would usually take more than a single night for this coloration to appear. Usually, it's a one-off situation and after the character gets some sleep they return to their normal appearance.

This is most prominently and obviously used in animation and comics; however, a bit of make-up is sometimes used on actors to show this trope.

Compare Open the Iris, which is a technique to show that a character's pupils (and irises—hey, cartoons) have dilated in order to easily convey an emotional reaction. Often combined with Dreary Half-Lidded Eyes. See Creepy Shadowed Undereyes too, where this trope might be the explanation for it.