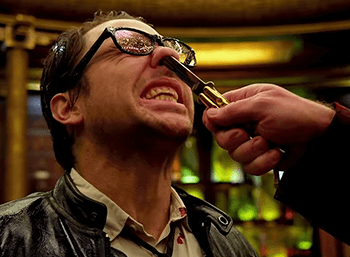 Regardless if it's your nose or your friend's, don't pick it with a knife.
"You delicately insert the lockpick into your left nostril. Unfortunately, you push it in too far, causing yourself a cerebral hemorrhage. Guess you should have been practicing on less difficult locks."
— Quest for Glory I, upon being commanded to "pick your nose".
Advertisement:

Children and those operating on a childlike mental level will often push objects into their own noses and ears, often resulting in a hospital trip. The favored item seems to be crayons, though anything small enough to enter the openings in question can be used. Alternately, shoving items into other people's facial orifices in anger or for experimental purposes also occurs commonly, and is often used as a child-friendly variation on the Ass Shove. Also related to Nose Nuggets, and Orifice Invasion.

It goes without saying, but this should not be done in real life. Inserting an object into your nose can cause a nosebleed, or worse, a rupture of the delicate nasal membrane. Seriously, don't shove anything into your nose.