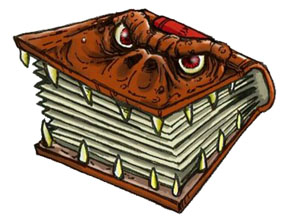 Image by Hawanja.
Used with permission.
"Oh, I get it. It's a book of biting satire."
— Mike Nelson, RiffTrax of Harry Potter and the Prisoner of Azkaban, regarding The Monster Book of Monsters
Advertisement:

Sometimes, due to various circumstances (generally involving magic), books may end up with a tendency to get... animate. They're often evil or hostile, but they don't have to be: often they just show a mischievous sense of humor — moving about at random, running away from grasping hands, floating, knocking objects off tables, etc. And yes, sometimes Moby-Dick has molars or Finnegans Wake gets fangy... but that's a sorcerer's library for you. Watch your fingers.

Subtrope of Animate Inanimate Object. See also Deadly Book, when reading a book's contents can kill. For a magical book whose contents are old and dangerous, see Tome of Eldritch Lore. Contrast Literal Bookworm, for something that bites into books.