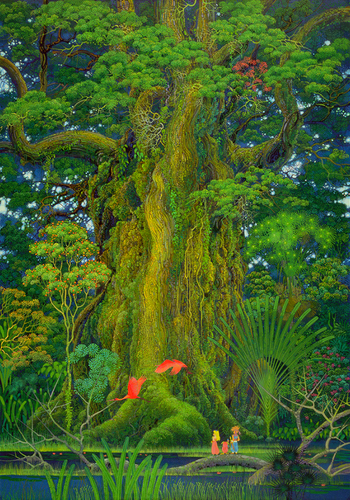 Secret of Mana, known in Japan as Seiken Densetsu 2 (聖剣伝説２, literally translating as Holy Sword Legend 2), is the second game in the World of Mana series. An iOS version came out in 2010, and was ported to Android in 2014. A 3D remake was released on February 15, 2018 to Steam, PlayStation 4, and PlayStation Vita.

It follows the story of a boy who mistakenly pulls the Sword of Mana out of a rock to cut a path back to town. Unleashing the Sword also opened its seal on evil, and monsters begin to ransack the world again. Back at the ranch, it doesn't take long for the pitchforks to come out, and the boy is exiled from his home forever. With nowhere to go, he is left with little choice but to fulfill his destiny as the Mana Knight — with the help of a runaway young lady and a sprite who tried to con them out of their money. Naturally, this involves stopping an evil empire before they unseal a number of MacGuffins and raise some demonic superweapon.

Advertisement:
Secret of Mana was promoted heavily by Nintendo at the time of its release, showcasing revolutionary gameplay features such as the 3-player co-op (taking the roles of the Boy, the Girl and the Sprite at the same time). If only one player is available, the game's AI will control the other characters, but there is a dial to determine how meek or aggressive they are.

Whenever you attack, there is a gauge. In order to deal the most damage, you must wait for the gauge to fill to 100%. Once an enemy is hit by a Charged Attack, they will be momentarily dazed and cannot be attacked until they recover. This makes the combat a little more strategic than simply mashing the attack button. Item, spell, and weapon management is deftly handled using the Ring Menu.

Of course, you get other weapons besides the sword. Each weapon has its advantages, either during battle or when navigating dungeons. For instance, the axe isn’t much different than the sword, but sometimes there’s debris in your way. Find a large gap which you can’t cross? Odds are there’s a stake in the ground on the opposite side and you can use your whip as a rope. With experience, your characters are able to perform a stronger version of the charged attack. The experience cap increases as you locate "Orbs" that, when obtained, you can take to the Ultimate Blacksmith, and he’ll forge a stronger weapon out of it.

As you progress through the game, you’ll also uncover Mana Seeds and Mana Spirits. Each Spirit will give your supporting characters a new group of spells to cast. The girl mainly has access to healing and support magic, whilst the sprite is going to be your nuker. In addition, each time you find a Mana Seed, you’re able to start leveling up their magic, as well.

The 2018 remake restored some of the nuances and plot elements the North American release had to remove due to space restrictions, and added all-new Grandia-style inn scenes between major story events that help flesh out your party. It also offers a choice between the original and remastered soundtracks, as well dual audio tracks for English and Japanese dubs.

The remake also adds several little touches that make menu navigation much more convenient: most notably shortcut keys for frequently-used weapons and spells, and switching between characters within the Equipment screens without having to switch control over to them entirely.

open/close all folders
A-D
E-K
L-Q
R-Z
You are hereby banished from this page. Now, get out of here!