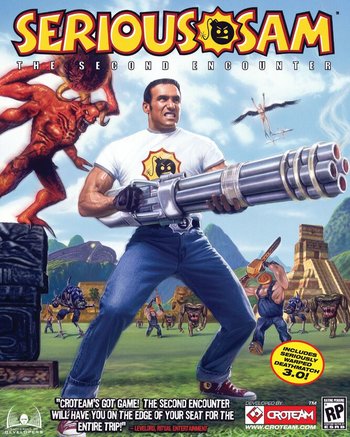 Click here to see the artwork of the HD version 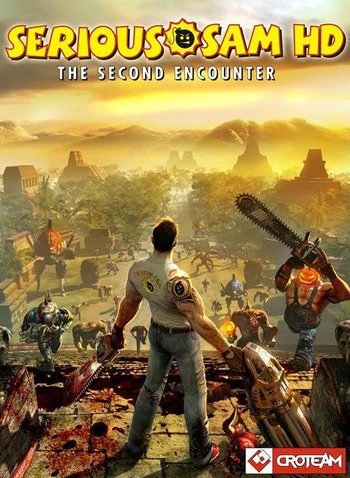 Serious Sam: The Second Encounter is a First-Person Shooter video game developed by Croteam and published by Gathering of Developers in February 5, 2002 for PC. It is a stand-alone expansion pack to the first game, and the second installment in the Serious Sam series.

After the events of Serious Sam: The First Encounter, Sam finds himself en route to Sirius when he collides with a "Croteam Crate-Bus" and crash-lands in Mayan-era South America. This time, Sam must battle across South America, Babylon and medieval Europe, where he will face bosses such as a wind deity, a cyborg giant larva and Mental's summoner before finding a second backup ship.

The gameplay remains the same as TFE: Sam must face hordes upon hordes of enemies with a varied weaponry. The weapon roster from TFE returns; the game also introduces some new toys of destruction for Sam: the Flamethrower, the Chainsaw, the Sniper Rifle and the rare (but valious and very destructive) Serious Bomb. The enemy roster also returns with many additions, such as a Dual Wielding frog, a multi-armed fire monster... And a chainsaw-wielding gardener with a pumpkin on his head.

In addition to all of the above, the game features a Hold the Line gamemode called "Endless", where the objective is to stay alive for as long as possible.

Like TFE, TSE was also subjected to the HD treatment with the release of Serious Sam HD: The Second Encounter in April 2010, distributed through Steam and published by Devolver Digital. This remake is mostly similar to the original, with a few noticeable exceptions such as Harpies not being able to carry Beheaded Kamikazes and the Gravity Room being replaced with a room full of moving platforms. It also features 16-player coop and the usual fanfare such as achievements and leaderboards. And if that wasn't enough, it received two additional pieces of Downloadable Content, a story expansion called Legend of the Beast and a multiplayer addon called Serious 8 which adds some skins from Serious Sam 3: BFE and a playable version of TFE's Final Boss.

It was also subjected to the VR treatment in 2017 with the release of Serious Sam VR: The Second Encounter, for PC.

This game shows examples ofnote Examples from TFE may apply here as well.