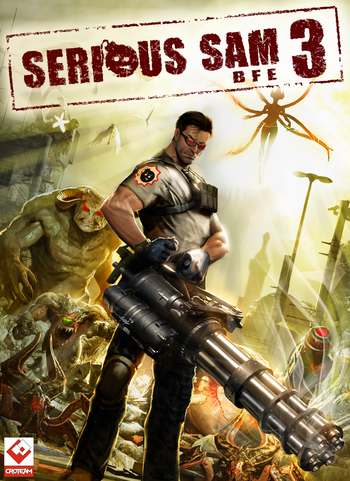 No cover. All man.
"By the middle of the 21st. century, having bled the Earth dry, mankind was on the verge of collapse. Then, a startling discovery was made. Beneath the sands of the earliest known human civilization, traces of another, even more ancient, but technologically advanced civilization are uncovered. The profound scientific implications of this discovery would lead humankind to the far reaches of the universe. Everything seemed perfect. But perfect never lasts. Without warning, the Earth was attacked by a chaotic horde of marauding aliens. Within three years, humankind was staring into the face of its own annihilation. In desperation, the world leaders turned to their last chance, an ancient artifact called the Time-Lock. They believed this relic from a long-forgotten race was a portal to a point in ancient history, and their only chance for survival. If only they knew how to turn it on."
— Opening Narration
Advertisement:

Serious Sam 3: BFEnote short for "Before First Encounter is a First-Person Shooter videogame developed by Croteam, published by Devolver Digital, and released in November 22, 2011, for PC, Playstation 3 and Xbox 360. It's the fourth installment in the Serious Sam series.

The game is a prequel set during Earth's final days attempting to repel Mental's invading hordes. Humanity doesn't yet know how to activate the Time-Lock, and Sam has been sent in with a team of EDF redshirts to find a scientist who might know. Things go rather sour from there.

The game has a more realistic look than the other games, with Sam returning to mow down hordes after hordes of monsters with an array of different weapons. It also takes hints from modern shooters with additions such as melee kills, iron sights and sprinting.

In 2017 the game received the VR treatment; this version was released as Serious Sam 3 VR: BFE.

Followed by Serious Sam 4, another prequel.

This game shows examples of

They explode, they swarm you in large groups, and they never stop screaming. Truly a bad combination

They explode, they swarm you in large groups, and they never stop screaming. Truly a bad combination