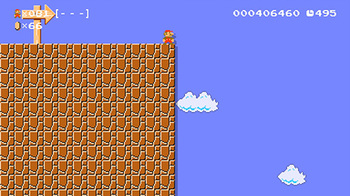 Is there a safe spot to jump onto that's offscreen? Only one way to find out.
"Only in the leap from the lion's head shall he prove his worth."
— Indiana Jones and the Last Crusade
Advertisement:

A Leap of Faith is a specific manifestation of the Behind the Black effect. In a Platform Game, falling off the bottom of the map will kill you, but in many situations there are places where you can still scroll down. If it is not possible to tell whether going down a hole will lead to instant death or a new area, it is a Leap of Faith.

If the character can jump horizontally far enough that their landing spot is not visible from the start of the jump, that too is a leap of faith if the platform doesn't scroll into visibility until after he's taken off. Scenery as You Go and Invisible Blocks may also be involved, as the landing spot may not appear until you've done the jump (in the former case), or may never be visible but it's always tangible (in the latter case).

A Leap Of Faith also occurs if there is a platform somewhere below the screen to land on, but there are still hazards around it. Thus, you end up having to guess where to position your character to land safely.

A careful level designer will ensure that any Leaps of Faith will be safe, or that they are always fatal. If the designer is inconsistent about this, it can be a particularly maddening form of Fake Difficulty. Alternately, an Easter Egg or other secret may be hidden behind a random Leap of Faith. If progressing through a level (or finding secrets) requires repeated experimentation with Leaps of Faith down otherwise indistinguishable pits, then you've got Trial-and-Error Gameplay.

If there are common, mostly useless powerups (like coins in Super Mario Bros. or rings in Sonic the Hedgehog), it's common to indicate pits where a Leap of Faith will be rewarded by arranging them in an arrow shape.

Compare Behind the Black, Trial-and-Error Gameplay, Fake Difficulty. Do not confuse with Blind Jump, which deals with spacecraft doing technically the same thing: Traveling to an unknown destination.