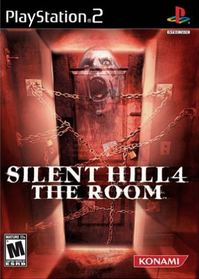 Henry Townshend lives in Room 302 of the South Ashfield Heights apartment complex. One day, he wakes up to discover that he has become trapped in his own apartment. He can't open any of the windows, his telephone doesn't work, nobody outside of the apartment can hear his cries for help, and multiple chains and locks have sealed off his door from the inside. A short message written on the door in what appears to be blood warns Henry not to go outside.

Henry spends 5 days trapped inside his apartment, plagued by recurring nightmares every time he sleeps. Just before he gives up all hope of escape, a hole appears in his bathroom wall. Henry decides that crawling inside the hole beats staying in the apartment, so he slips into the wall... and ends up transported to various locations around the town of Silent Hill. These locations, all infected by an evil power that seems to eat away at its surroundings, force Henry to defend himself from various monsters and ghouls that pursue him for unknown reasons. In each location Henry goes to, he always finds one other person trapped in there with him — and that person always dies.

The same power haunting Silent Hill appears to have taken up stalking what few living humans Henry manages to meet in this strange otherworld before killing them in a ritualistic fashion. What purpose do these killings have, and how do they tie into Henry's attempts to escape Room 302?

The true horror of SH4 comes from the eponymous room itself. Room 302 initially serves as Henry's only safe haven — he can heal injuries and store items found during his excursions — but as his journey into madness deepens, his apartment becomes overtaken by the evil power haunting him in Silent Hill. The room eventually degenerates into something sentient and demonic that will actively hurt Henry unless he can exorcise the forces invading his apartment and defend his last bastion of safety and sanity.

A popular rumor about Silent Hill 4: The Room — the fourth game in Konami's Silent Hill franchise, released in 2004, and the first to receive a subtitle — says Konami originally conceived it as a wholly original Survival Horror game, but converted into a Silent Hill game during development. In actuality, Konami intended for it to serve as a spinoff/separate Gaiden Game from Team Silent called Room 302. After Konami nixed this plan, it incorporated elements of that game into SH4, which explains why it has several differences in gameplay to previous Silent Hill games (including an on-screen health bar, limited inventory space, and a number of first-person sections).

SH4 has loose ties to previous Silent Hill games: Names and locations briefly mentioned in memos found during past games are fully realized in this game, and the father of James Sunderland (from Silent Hill 2) works as South Ashfield Heights' superintendent.

Not to be confused with The Roomnote although the other game in this franchise to take place in a small residency does have a Lisa tearing the player apart.

Silent Hill 4: The Room contains examples of the following tropes:

"Guess I'll have to find a new place to live, huh?"
Feedback