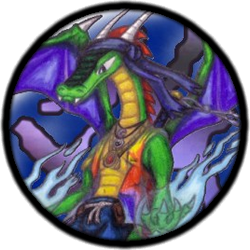 Warning: Here there be dragons! Well... maybe just one...

Hello, Roahm Mythril here once again, and it's time to begin our next project.

A dragon who makes Let's Plays. Being a dragon, he is easily distracted by shiny objects.

His most well-known project is a series of Perfect Runs (No Damage, Buster Only, No Charge Shots) of the Classic Mega Man games (and also Nezumi Man). Games he has completed perfect runs for include:

Perfect Runs
Unless otherwise noted, Roahm has only completed Perfect Runs for Robot Master stages. Exceptions to the "Buster Only" rule are made if it is impossible to proceed without a special ability.

He has also performed "blind" runs of various games (where he goes through each game sight-unseen for the first time). Several of them are Mega Man related, and with most of these he does plan to play them again as Perfect Runs.

Roahm has also tried his hand at many other games. His projects and playthroughs include:

His videos are found here

This LPer and his LPs have displayed the following Tropes:

Thank you very much for watching, I hope you're enjoying this series so far, and I shall see you again next time. Until then, fare thee well.