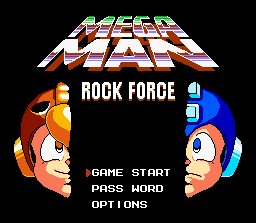 A fan-made Mega Man (Classic) game by GoldwaterDLS. It stars Mega Man and the Rock Force, a group of Robot Masters formed to ensure there would always be someone to fight against evil should Mega Man be unavailable. When eight Robot Masters suddenly rebel against their employers for unknown reasons, the Rock Force and Justice Man, a robot Dr. Light created to aid Mega Man in training the group, were sent out to neutralize the rebels, only to mysteriously disappear. Mega Man thus decides to get into action himself in order to stop the rebels, rescue the Rock Force, and investigate what happened to Justice Man (an earlier incident regarding Shock Man six months ago may have something to do with it)...
Advertisement:

The Robot Rebels consist of: