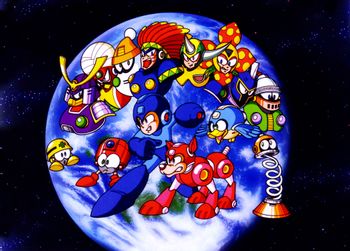 "I am Mega Man. Back for the

sixth time again..."
In the year 20XX AD...The 1st Annual Robot Tournament was held with 8 of the world's most powerful robots. But...Mr. X, the sponsor of the tournament, took control of the robots and began to Take Over the World.
—The Narrator
Advertisement:

Entry #6 for the Mega Man (Classic) series, released November 1993 on the Famicom in Japan, and overseas on the NES in March 1994.

One year after the events of Mega Man 5, the First Annual Robot Tournament is being held, and people from all over the world send their own unique creations to show off to the world. Dr. Light, being a pacifist, doesn't enter Mega Man into it, but sends him along to make sure the contest runs smoothly. Everything is going well, until only the eight finalists are standing. The host of the contest, the mysterious billionaire Mr. X, takes control of the robots. He tells everyone the contest was only held so he could use the robots to conquer the world, so Mega Man must keep Mr. X and these new Robot Masters from their goal of world conquest.

Where once Rush transformed into various vehicles to help Mega Man, in this game he instead becomes an Equippable Ally by turning into one of two adaptors, combining with Mega Man to give him extra abilities with no ammo requirements. With these, Mega Man can either become the hard-hitting Power Mega Man, or use a jetpack as Jet Mega Man, both at the cost of his slide ability.

Capcom thought that this game was too late to release for the NES due to the SNES being out by this time and wouldn't publish it in North America. Nintendo stepped in to ensure it released in the region (likely because they hosted a competition in Nintendo Power for Official Fan-Submitted Content and felt an obligation to the winners), completing the series's numbering and avoiding the awkward holes created in a certain other series whose name is abbreviated with two of the same letter. It was the last game Capcom developed for the NES.

It is available on the Nintendo 3DS Virtual Console in Japan, Europe, and the US.