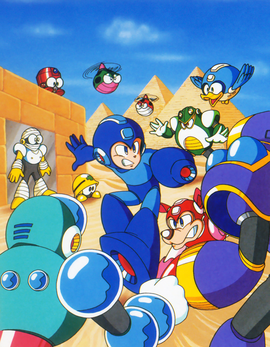 The fourth of the five Mega Man outings on the Game Boy, Mega Man IV for the most part follows the formula of its three predecessors, but this time around takes things a couple of steps further.

The city is holding a robot expo one day, when Dr. Wily's saucer appears in the sky and transmits a signal that causes all the robots to go nuts. Worse still, Wily has rebuilt eight of his previous Robot Masters, and has decided that the third time's the charm for the Mega Man Killer series, which this time is represented by Ballade. Fortunately for Mega Man, Dr. Light has gotten tired of sitting ineffectually on the sidelines, and has equipped his lab with the ability to produce upgrades and items for Mega Man, so long as he can find enough P-Chips to make the upgrades.

This sequel continued to expand the series, mostly through the shop mechanic, though also adds a greater emphasis on the storyline (which is a little less of an Excuse Plot this time around) and makes the game even longer than in the previous entry. The overall gameplay is broadly similar to that of Mega Man 5, with Beat being introduced, though this game doesn't incorporate 5 NES's "lose your Charge Shot when you get hit" mechanic, instead including a recoil for when you fully charge up your Mega Buster.

The remaining Robot Masters from 5 NES...weren't held over for the following outing, which took the Game Boy subseries in a totally different direction.