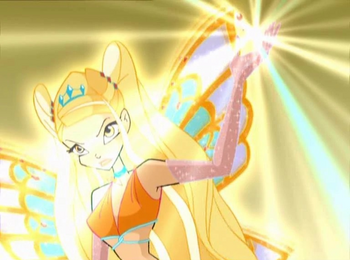 And the fairy said, “Let there be light,” and there was light.
"If thou wouldst pierce the shadows... make thee a blade of Light."
— Hydaelyn, the Mothercrystal, Final Fantasy XIV
Advertisement:

Want to show how good and just your hero is? Want to show the elemental forces of evil exactly why they need to Beware the Nice Ones? Then just use this counterpart to Casting a Shadow: Light! This frequently involves healing and divine powers, although this can mean literal light as well. This may overlap with Holy Hand Grenade if the powers in question are used to attack (and are explicitly divine rather than merely being light). Like most other types of elemental manipulation, the laws of physics give way to Rule of Cool. Users of light powers may be able to project Hard Light or fire Frickin' Laser Beams, or use a more subtle approach such as using Holograms to become a Master of Illusion.

Light has many similarities to fire, producing both illumination and heat. Thematically, however, fire is often presented as a primal or destructive force, whereas light is a protective force that literally illuminates the darkness. In some cases, light and fire overlap and sometimes intersects with electricity as well. All three of these powers may also possess qualities of purification or total destruction, depending on the work in question. See also The Power of the Sun, as, in fiction, a solar power is occasionally a mixture of the powers of fire and light.

The Hero is likely to use this, and if so, is likely to be a saint. The hero is likely to learn this from the Big Good or the The Mentor, who will be the master of this. Alternately, a work may instead use Light Is Not Good, in which case, this may be used by the villain. In that case, similar to how The Sacred Darkness illustrates a way to portray Casting a Shadow in a pure and holy fashion, a villanous or "corrupt" form of light may involve such lovely things as light so bright that it burns out the victim's eyes, causes his flesh to be brutally melted off, or making his light come with other harmful radiations etc.

A Sub-Trope of Elemental Powers. Usually trumps darkness, though the reverse is also possible. Or both, even. For double the fun, see Yin-Yang Bomb.

This trope is Light purely acting as its own element.

A Sister Trope to Holy Hand Grenade and Holy Is Not Safe (also overlaps with Light attacks when fueled by good).

Contrast with Power of the Void, Casting a Shadow. Has nothing to do with Fall Out Boy.