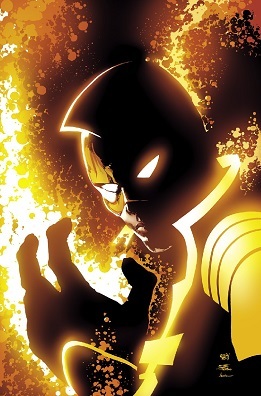 The Ray is a DC Comics Legacy Character themed around light-based powers, originally created by Quality Comics in The Golden Age of Comic Books. The Rays are most commonly associated with DC's team of Quality characters, the Freedom Fighters.

In the early 1940s, Quality Comics needed a new feature for their title Smash Comics, so Will Eisner and Lou Fine produced the first Ray story, which ran in Smash Comics #14.

Happy Terrill was a reporter exposed to radiation on an experimental balloon ride into the atmosphere, which turned him into a coherent beam of light. Quite what that translated to in terms of powers changed from story to story, ranging from projecting light, to being pure energy, to riding light beams and manipulating magnetism.

After 1943, Happy fell into comic book limbo for several decades, remaining there even when DC acquired the Quality characters in 1956. He wouldn't see the light of day again until 1973, when Len Wein brought most of the Quality characters back in Justice League of America vol. 1 #107 as the Freedom Fighters, the resident heroes of Earth-X, a world where World War II continued into the 1970s. For the next decade or so, most of his appearances would be as part of the team.

When Crisis on Infinite Earths hit in 1985, among other things it allowed DC to integrate all the characters they'd acquired from other companies, including the Quality characters, into one universe.

Ray had spent his childhood kept indoors in darkness, told he would die if he were exposed to light, only to discover everything he thought he knew was wrong: He'd been kept in the dark because he'd inherited the Ray's powers as an infant, and was unable to control them. The man who'd raised him, who he'd thought was his father, was actually his uncle; his real father, Happy Terrill, was still alive. And on top of that, his father had been set up to gain his powers so he'd have a child "born one with the light", who would be able to communicate with an immensely powerful energy being, the Light Entity, and prevent it from trying to return home to Earth, displacing the planet and killing everyone - that child being, naturally, Ray himself.

The mini's success eventually resulted in an ongoing written by Owsley, now using the Priest name, which focused on Ray getting to grips with the outside world and dealing with his dysfunctional relationship with his father, with hefty amounts of gambits and Time Travel thrown in. It ran for 29 issues, plus an annual, from 1994 to 1996.

After both Task Force and the ongoing were cancelled, Ray went on to join Young Justice, and took up his father's place with the Freedom Fighters during Infinite Crisis until they fell.

Justin Gray and Jimmy Palmiotti introduced the third Ray, Stan Silver, in Brave New World and the first Uncle Sam and the Freedom Fighters miniseries in 2006. Stan was a journalist who gained his powers in similar circumstances to Happy, exposed to radiation on a trip to see the close approach of a comet. Unlike Happy, however, he was a self-absorbed pleasure seeker. He joined a black ops government team using the Freedom Fighters' codenames who got recruited by Uncle Sam to help him fight their bosses and save the nation. Stan eventually revealed himself as a mole working for the bad guys, just as Ray made a comeback with a Big Damn Heroes moment and trounced him.

The second Uncle Sam and the Freedom Fighters mini saw Happy get a minor Re-Power and take up the mantle of obscure Quality hero Neon the Unknown, calling himself Neon.

Cue the Cosmic Retcon of Flashpoint and the New 52.

Gray and Palmiotti introduced the fourth Ray, Lucien Gates, in a four-issue mini in 2012, a Korean-American lifeguard who gained his powers after being hit by a misfiring particle beam. Of note is that Gray and Palmiotti hinted Lucien wasn't the first Ray of the new timeline, having him worry about copyright infringement and mentioning a version of Happy's origin involving a "light bomb". Gray and Palmiotti were planning a new team of Freedom Fighters, but it didn't pan out.

Steve Orlando reintroduced Ray Terrill in a DC Rebirth one-shot setting up Justice League of America (Rebirth). In the new timeline, he'd been raised by his mother rather than his uncle, and went from being straight to gay. He left home after an argument with his mother, and the trauma around his powers first manifesting shortly afterwards sent him wandering the world invisibly for years, until seeing a long-lost friend attacked motivated him to step up and become a hero. Batman subsequently recruited Ray for his new League.

Ray Terrill is set to be the first LGBT superhero to get his own show, the animated Arrowverse series Freedom Fighters: The Ray. Here, he's a journalist who gains his powers from exposure to a 'genetic light bomb'. This iteration of the character will be voiced (and portrayed in live-action) by Russell Tovey. The Ray had previously made several non-speaking cameos as a member of the expanded Justice League in Justice League Unlimited.)

Tropes associated with the Rays: