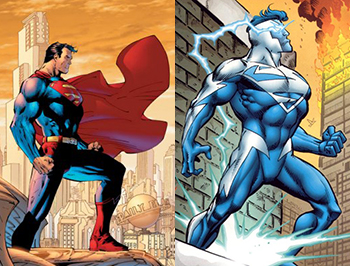 From Flying Brick to Shock and Awe.
Advertisement:

While adding or removing characters' superpowers can be controversial (especially if it's just New Powers as the Plot Demands), the actual mechanics don't need a lot of explanation for the fans to accept it. The logic wonk occurs when, rather than go "up" or "down" with how his power works, the direction goes "cantaloupe", and the character gains an entirely new set of superpowers.

This practice isn't used as much nowadays, because, while changing powers along with a reimagining of a character's personality is artistically nice, it doesn't make sense for a character with an internally-logical origin. Since many characters are largely defined by their powers, it smacks of an inability to be really creative, especially if the reimagining is to make a character Darker and Edgier. If this falls flat (as it often does), the results linger in the Dork Age.

This concept is often lampshaded in the free-rein areas of Elseworlds and What Ifs, where the re-power is actually just a creative writer elaborating on a vague and mundane power to its extreme logical end, showing how characters could become very powerful.

Compare with Got the Call on Speed Dial, Discard and Draw, and Skill Point Reset.