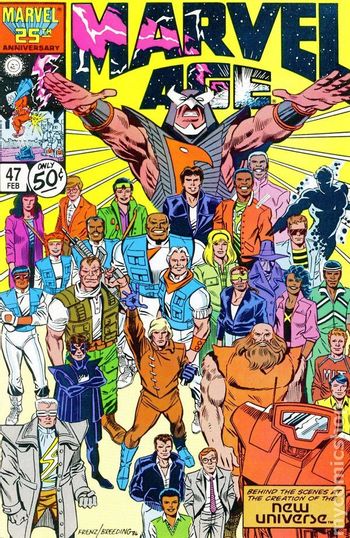 The cover of Marvel Age #47, showcasing the New U cast.
Advertisement:

In 1986, which was hailed as the 25th anniversary of Marvel Comics, Marvel decided to mark the occasion by launching a new, very different, line of superhero comics.

The New Universe was launched as a new imprint, with its new heroes operating in a new shared world. It aimed to be more realistic than (and completely separate to) the Marvel Universe, with harder science and lower power levels. The premise, summarised by the line's slogan, was "The World Outside Your Window" - the New Universe was just like the real world until a single Point of Divergence, a Mass Empowering Event called "The White Event", gave extraordinary powers to ordinary people scattered across the planet.

However, not every creative team followed this approach, so some early New Universe comics also contained things such as pre-existing magic realms, aliens, and suits of powered armor. This led to a range of retcons to bring those storylines back into line with the setting's established rules.

After the first year, four of the initial eight titles were cancelled and the New Universe started to pivot from "The World Outside Your Window" to a new approach, showing how the presence of superhuman 'paranormals' had changed the normal world. This led to big shake-ups in the setting, such as "The Black Event", in which a paranormal destroys Pittsburgh, plunging America into war.

Sales continued to drop, the remaining titles switched to a new 'direct market only' format that was only sold in specialist comic shops (which also allowed the titles to run short back-up stories in each issue) and, eventually, in 1989, all New Universe titles were cancelled. The line (and the New Universe imprint itself) ended with The War, a miniseries in which tensions over the destruction of Pittsburgh lead to World War III.

Although The New Universe no longer existed as an imprint, the setting and characters were eventually connected to the Marvel Universe and revisited in the pages of Quasar and Exiles. In early 2006, Marvel also published several Untold Tales of the New Universe, one-offs and back-up stories, telling new tales set before the Black Event.

In December 2006 Warren Ellis and Salvador Larroca launched a single-title reboot of the New Universe concepts, newuniversal. It kept the concept of the White Event empowering people in a seemingly mundane world but was also set in an Alternate History rather than "The world outside your window".

Concepts from newuniversal and the original New Universe were later also reused in The Avengers (Jonathan Hickman) with a Nightmask and a Starbrand appearing in that title as part of the 2013 storyline Infinity, where a new White Event happens on Earth-616note The 'main' earth of the shared Marvel Universe. They eventually got their own title, Starbrand & Nightmask. Several reimagined New Universe characters also appeared as supporting case and antagonists in Al Ewing's The Ultimates (2015).

"The tropes outside your window":