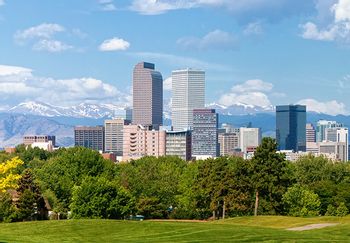 Denver is the largest city and the capital of the State of Colorado. With a population of about 735,538 in the city proper (as of 2020) and nearly 3,000,000 in the metro area, and in one of the more sparsely populated regions of the country, it is also the largest city for nearly 600 miles in every direction note  (The nearest larger city is Phoenix, Arizona). It is nicknamed the "Mile High City", due to its elevation of 5,280 feet (1 mile) above sea level. It has sports teams in all four American major leagues, (NFL, MLB, NBA, NHL) as well as having teams in other sports (Soccer, Lacrosse, Arena Football, Rugby, a few minor league teams, and even served until 2018 as the home base of Furniture Row Racing, one of the few NASCAR teams based outside Charlotte, North Carolina; let's just say it's a sports obsessed town). The team with the biggest following is the NFL's Denver Broncos.

Despite having a high level of local government corruption (police corruption was once ranked as highest in the US) and ranking fourteen in the US for ozone pollution, Denver is generally portrayed as clean. Though the city is typically shown with the nearby Rocky Mountains in the background, Denver lies on the high plainsnote (In pictures facing west, Denver has mountains; in pictures facing east, it has far flatter terrain.) and late spring through early fall can be hot, while fall through early spring can be significantly colder. Throughout the year Denver is mostly dry, and due to the lack of a large body of water nearby, the temperature can fluctuate as much as 45° F in a day. Climatically Denver is on the edge of a climate more typical of mountains and a climate more typical of the high plains, both being semi-arid.

Due to its location, the city has a very outdoorsy culture. Residents naturally love heading up to the mountains on weekends for activities like skiing, camping, hiking, and kayaking. Denver is also a very 'blue' city, almost always being represented by a Democrat, which is partly due to being more diverse than most other places in Colorado. A quarter of the city is Hispanic and around a fifth speaks Spanish at home. There are also significant Asian and African-American minority groups in the city.

Much of both the city of Denver and the state as a whole migrates from other parts of the country; as a result the accent is sometimes perceived as 'neutral' due to having similarities with areas all over the country. This has also caused a great deal of traffic and gridlock.

Beginning around the turn of the millennium (these sorts of timelines are never precise), Denver became something of a magnet for young, well-educated professionals looking for a "cool" place to live that wasn't a hideously expensive coastal city. Proximity to winter sports sites, a thriving downtown area and and a growing tech scene made Denver an attractive option. That put Denver on a lot of "best places to live" lists, which, in turn, attracted even more people. The explosive population growth in Denver has had significant effects on state politics (Colorado has evolved into a solidly Democratic state, thanks mostly to the Denver area) and the local economy — Denver might have been an affordable option in 2000, but it's now one of the most expensive cities in the country (albeit still cheaper than New York or San Francisco).

Shows based in Denver: