Literature / The Sum of All Fears 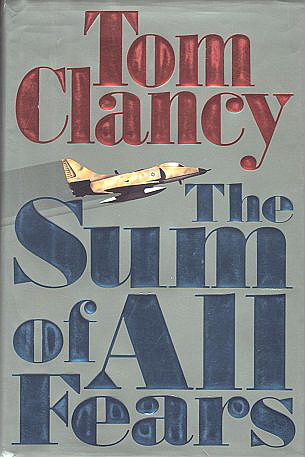 "Why, you may take the most gallant sailor, the most intrepid airman or the most audacious soldier, put them at a table together - what do you get? The sum of their fears."
— The book's preface, quoting Winston Churchill.
Advertisement:

The Sum of All Fears is the fifth Ryanverse book written by Tom Clancy. It was published in 1991, just days before the Moscow uprising

, and takes place at roughly the same time, being the seventh book chronologically. Russian politics in the aftermath of the destruction of the Berlin Wall is a main element of the book.

The title is based on an anecdote recounted in the foreword: when you get a group of already hostile people together, their fears are amplified, to the point where the slightest misstep can set them on a course for war.

The story actually begins in 1973, during the Yom Kippur War. Israel, in its darkest hour, contemplates releasing its nuclear weapons against the Egyptian and Syrian armies, but rescinds the order once things turn for the better. However, in the chaos of battle, one of the fighters carries a nuclear bomb into battle and gets shot down, losing its warhead in the countryside where it disappears.

Three years after the drug interdiction fiasco in Columbia, Jack Ryan is now the Deputy Director of the CIA, but is essentially the de-facto Director of Central Intelligence. He constantly bickers with the administration, especially the National Security Advisor Elizabeth Elliot. Meanwhile, the Soviet Union is falling apart, which no one is entirely happy about, and a new crisis erupts in Israel.

The book follows several factions, from Ryan and the CIA, to Andrey Narmonov, now the President of the Soviet Union, to Ismael Qati, a terrorist leader who discovers the missing nuclear bomb from the Yom Kippur War and is determined to use it to achieve his means.

It was the fourth book of the series to be turned into a film.

The book contains the following tropes:

What Nixon and Kissinger had failed to do, what had defied the valiant efforts of Carter, the halfhearted attempts of Reagan, and the wellmeaning gambits of Bush and his own predecessor, what all had failed to do, Bob Fowler would accomplish.