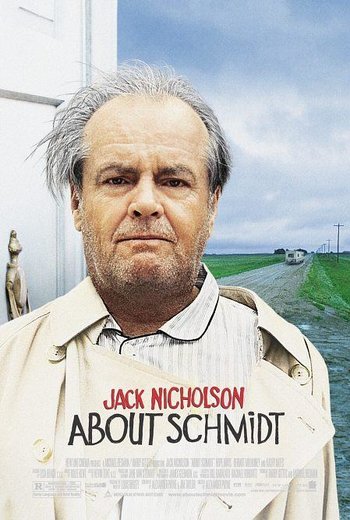 "I know we're all pretty small in the big scheme of things, and I suppose the most you can hope for is to make some kind of difference, but what kind of difference have I made? What in the world is better because of me?"
— Warren Schmidt
Advertisement:

About Schmidt is a 2002 dramedy movie written and directed by Alexander Payne, starring Jack Nicholson as Warren Schmidt. It follows the story of an insurance actuary who begins his retirement and is unsure of what to do with his self-estimate of 9 years he has left.

Schmidt is trying to come to terms with the prospect of spending his last remaining years on Earth with his boring, nagging wife. Out of boredom, he decides to sponsor a child in Tanzania, to whom he writes letters about how much his life sucks now. One of the few things that keeps him going is his daughter Jeannie (Hope Davis), who is about to get married to a dimwitted waterbed salesman named Randall (Dermot Mulroney), who also turns out to be a jerkass pyramid scheme recruiter.

As he goes out one day, mulling about his wife, he returns to find that she has suddenly died from a cerebral blood clot. Not much later, he finds some old love letters lying around the house. It turns out that his wife had an affair with his best friend, some 25 years earlier.

Deciding he's had enough of just waiting for death to knock on his door, Schmidt embarks on a road trip to (stop!) his daughter's wedding, visiting the places he frequented throughout his life on his way over there.

The whole time Schmidt narrates his views through the letters he sends to his foster child in Africa. Along the line he reflects about the life he had, he learns to miss his deceased wife and starts questioning if anything he did actually made a difference to anyone.

Dear Ndugu, here are some examples of the following tropes found in this movie: