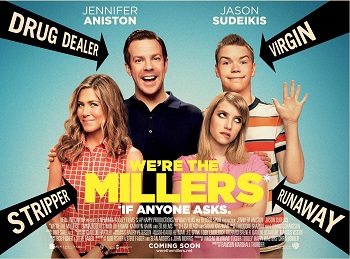 After small-time Denver pot dealer David Clark (Jason Sudeikis) gets his money and stash stolen, his drug-lord boss (Ed Helms) offers to waive the debt David owes him and pay him a hundred thousand dollars besides... if he'll go to Mexico to pick up "a smidge--maybe a smidge and a half" of marijuana from his supplier for him. Or he can just kill him now.

David decides a single man would arouse suspicion at the border, so he decides to recruit himself an All-American family for cover: His stripper neighbor Rose (Jennifer Aniston), local teen runaway Casey (Emma Roberts), and dorky teen next door Kenny (Will Poulter). Hilarity Ensues.

A sequel is rumored to be in development, with some sources reporting that Jennifer Aniston is being paid $15 million to reprise her role as Rose.

Tropes used in We're the Millers: