Literature / The War Against the Chtorr 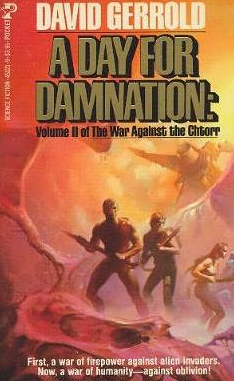 "Life is hard. Then you die. Then they throw dirt in your face. Then the worms eat you. Be grateful it happens ...In That Order."
— Solomon Short, "A Matter for Men"
Advertisement:

The War Against the Chtorr is an incomplete sci-fi series by David Gerrold about an invasion of Earth by an entire alien ecosystem, set 20 Minutes into the Future. Just about everyone in The Government has become an Obstructive Bureaucrat, save the odd Magnificent Bastard. The rest of the world has forced the United States to accept crippling economic treaties to keep it from engaging in War for Fun and Profit. Then The End of the World as We Know It begins. First a series of alien plagues wipes out most of humanity, and then aliens (much) bigger than microbes begin popping up. The invaders consist mainly of giant worms, insects, plants and other, extremely unpleasant stuff. They eat everything, resulting in massive environmental damage, but they really like to eat people. Then it gets worse.

So far there are four books out, with the fifth completed, after over 20 years, but awaiting publication; there are supposed to be seven altogether.

The known titles are: