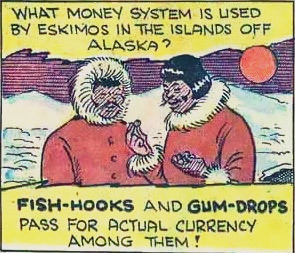 I read it in a comic. It must be true.
"...Do they not see that only Dust can give them what they want? For it is money and power and magic all intertwined in one miraculous substance! It is the essence that binds our civilizations together."
— Ahsun ar-Delgùr, Endless Legend
Advertisement:

Normally, your money is not inherently useful. Sure, you can melt down coins and make them into some sort of art project, or you can try to use your paper money to start a fire, but for the most part, money only has value because people agree that it does. The moment people lose faith in it, money will be worth nothing. (The proper term for this is fiat money.)

Not so with Practical Currency. You can actually use it for something. Maybe it's some kind of food, medicine, or weaponry. It's not too different from a barter economy—it's still goods in exchange for goods and services—but unlike barter, it also serves as a universal medium of exchange (people who don't need the item itself will still accept it because they can trade it for something else) and a universal measure of an item's value.

In the real world, there is commodity money

. Not all commodity money is practical currency, however: gold, for example, until very recent times had very few not entirely decorative uses — mostly, tableware — but made good commodity money because it is pretty easy to tell what it is (to the uninitiated, silver, aluminum, and steel all look similar at first glance), rare (but not too rare, or else not enough people would have it to make many trades with), divisible (hard to make change with one cow), does not corrode, and had a generally-stable global supply (the last two combine to make it a relatively stable source to put your money in - see the Real Life entry on rice for what happens when it isn't).

Weird Currency is a Super-Trope; Energy Economy is a Sub-Trope. See also Gold–Silver–Copper Standard. This is often used as a way to justify Cast from Money, and can also justify the Money Spider trope.