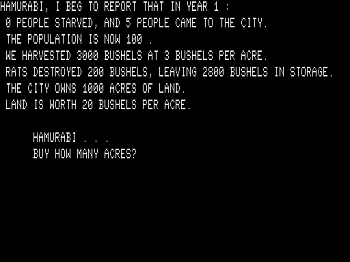 This game is the ancestor to Civilization
"HAMURABI: I BEG TO REPORT TO YOU,.."
Advertisement:

Hamurabi is a text-based and turn-based video game written by Doug Dyment in 1968 in the FOCAL language under the name The Sumer Game and ported to BASIC by David H. Ahl. It was inspired by the 1964 game The Sumerian Game

This game then was spread, with other games written in BASIC, by the book BASIC Computer Games

In this game, in order to prevent a famine, the player had to manage the production of grain of a city, measured in bushels, by allocating some to planting, some to consumption by citizens and the remainder to stocking in silos, which could be attacked by rats; he was also able to buy and sell acres of farmland.

At the tenth year, the player was ranked relative to historical rulers, system which have been later reused by Sid Meier in his Civilization.

This game was a precursor for other management and simulation games.

You can play here

This videogame provides examples of the following tropes: