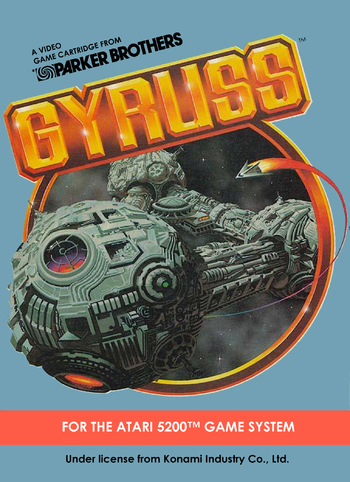 Gyruss was an arcade game developed and published by Konami in 1983. Gameplay is similar to Galaga in that you have to shoot down scores of enemy ships as they fly in and out of formation. However, the playing field is displayed in a Tempest-like 3D perspective, allowing your ship to rotate a full 360 degrees.

It's probably best known for its in-game theme song, a remix of Johann Sebastian Bach's Toccata and Fugue in D minor. (In stereo, no less!)

The game was ported to various Atari systems and the Nintendo Entertainment System (the latter in the US under Konami's subsidiary Ultra Games, and vastly different from the arcade version).

One of two games (the other was Time Pilot) that Yoshiki Okamoto developed with Konami before jumping ship to Capcom and making them famous.