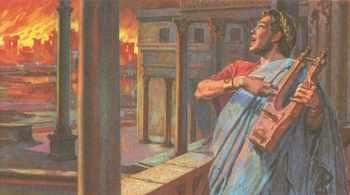 In a hereditary monarchy, every so often the throne is inherited by someone completely out of their gourd. Maybe it's the fault of that lead-lined plumbing, or those mercury-laced medicinal elixirs, or maybe it's genetic (in which case you're in some deep trouble). Whatever the cause, the sovereign is still given the full power and support of the state despite their obvious insanity, with inevitably disastrous consequences.

The Caligula will be wildly irrational, violently moody, extremely debauched, will never tolerate being told anything they don’t want to hear, and are probably afflicted with a god complex. In short, they will be a Psychopathic Manchild with the power of life or death over everyone whom they can reach. They may be a sexual deviant, or they might take pleasure in the pain and suffering they cause. They may indulge in renaming cities or even the entire country after themself or throwing out increasingly ridiculous decrees with brutal punishments in store for anyone who breaks them. Whatever form the madness takes, one thing is certain: to do anything the Caligula finds displeasing is to inevitably be dragged off to a grisly death or worse. Of course, any number of things might trigger their rage, and they might even decide on a whim to punish those who have not done anything at all. And while all of this is going on, the land over which the Caligula rules is rapidly going down the drain due to their neglect. Here, in particular, they have a decided advantage over most other crackpots when it comes to messing things up: they can start wars. Be it for the perceived personal glory or their obsession with perceived enemies, the Caligula's country will probably be in a constant state of war.

Due to their continuing close proximity to the Caligula, members of the court (decadent or otherwise) will be the primary targets of their fits of rage. Nobody within reach is safe from them, whether they be nobles, servants, bureaucrats, foreign ambassadors, or even members of their own family. The Caligula is very definitely a Bad Boss. With any luck, thanks to The Starscream and/or La Résistance, a conspiracy will eventually develop to remove the crazy sovereign from his post... permanently.

This is not limited to sovereign heads of state. The Caligula can be anyone wielding great power within an organization while being completely nuts.

better known as Caligula (Little Boots, his childhood nickname); remembered for talking to statues, locking granaries, declaring war on the god Neptune (and "winning", then commanding his soldiers to collect seashells as war-prizes), making his horse a consul (admittedly, this one may have simply been a gesture of spite towards the senate), and boning his sisters. (Though the veracity of some of these claims is in question, the reputation persists. See here for all the details.)

In terms of the ranks of Authority Tropes, the tropes that are equal are The Good Chancellor, Evil Chancellor, Standard Royal Court, and Decadent Court. The next step down is The Brigadier. The next steps up are The Evil Prince, Prince Charming, Prince Charmless, Sheltered Aristocrat, Warrior Prince, The Wise Prince, and all Princess Tropes.

Oslo was made a Duke out of his combat powers. However he is undoubtedly batshit insane with his demands.

Oslo was made a Duke out of his combat powers. However he is undoubtedly batshit insane with his demands.