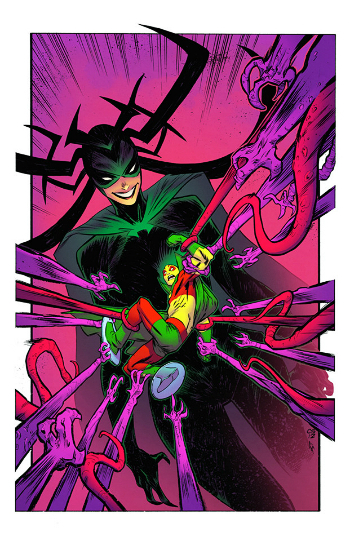 Hela vs. Mister Miracle. Art by Cory Smith and Simon Gough.
Thanos: You are bold for a woman who has lost everything.
Hela: Bold? I am where the bold go to die. I am Hela. Queen of Niffleheim. Mistress of the damned and the dear departed.
— The Unworthy Thor #5

Hela has appeared in animated form in the Direct-to-Video movie Hulk Vs. Thor, one episode of The Avengers: Earth's Mightiest Heroes! and two episodes of Avengers, Assemble!. She made her live action debut as the Big Bad in Thor: Ragnarok, the 17th film in the Marvel Cinematic Universe, played by Cate Blanchett. The MCU version of Hela differs from her comics counterpart in that she is the daughter of Odin rather than Loki and is therefore also the estranged older sister of Thor and the true heir to the throne of Asgard. She is also notable as being the first major female villain in an MCU film. To see tropes about the MCU version of Hela, visit her own character page just here.