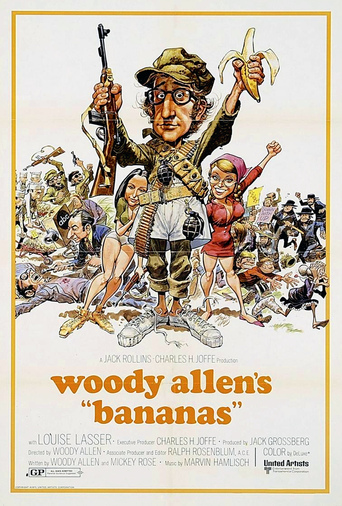 The theatrical poster, illustrated by Jack Davis of MAD magazine fame.
"Although the United States is, uh, a very rich country and San Marcos is a very poor one, there are a great many things we have to offer your country in return for aid. For instance, there, uh, there are locusts. Uh, we have more locusts than... uh, locusts of all races and creeds. These, these locusts, incidentally, are available at popular prices. And so, by the way, are most of the women of San Marcos... despite the tiny size of our nation, few people realize that we lead the world in hernias. They also fail to realize that before Columbus discovered your country, he stopped in San Marcos and contracted a disease which today can be cured with one shot of penicillin..."
— Fielding Mellish, Bananas
Advertisement:

A 1971 comedy movie by and with Woody Allen as Fielding Mellish. He's a lonely product tester in the big city who tries and fails to maintain a relationship with Nancy, a politically motivated woman whose pet project for the year is raising money for the rebellion in San Marcos, a Central American country ruled by dictator Vargas and driven by rebellion. Despondent over the break-up, Fielding travels to San Marcos to see things for himself and gets sucked into the fight against Vargas. Hilarity Ensues.

Example of:
So Long, Suckers!