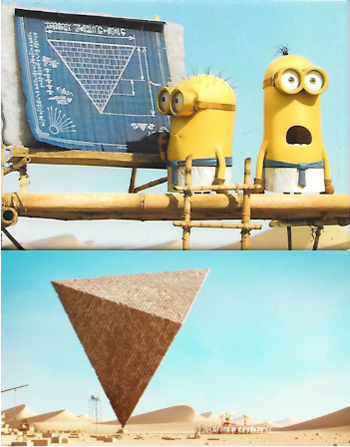 "What does 'dn ǝpᴉs sᴉɥʇ' mean?"
Where Just Following Orders gets too extreme. When a construction worker unknowingly is looking at a blueprint the wrong way, instead of figuring out what's wrong with it, he builds his project accordingly to the misread plans. It's only after construction is finished that the worker realizes his error, only for it to be too late. Expect yells of You Fool! or the worker experiencing a Dope Slap for his idiocy.
Advertisement:

Alternatively, the worker might be confused about the plans and mentions his doubts about the project to his boss who, unaware that the plans are upside down, invokes I Don't Pay You to Think and orders him to follow the plans exactly.

Subtrope of Bizarrchitecture, which has to be at work in order for the project to be standing after the builder is finished. Also relies a lot on Rule of Funny. See also Had the Silly Thing in Reverse. May result in Achievements in Ignorance. Not to be confused with Construction Zone Calamity, which is another disaster altogether.