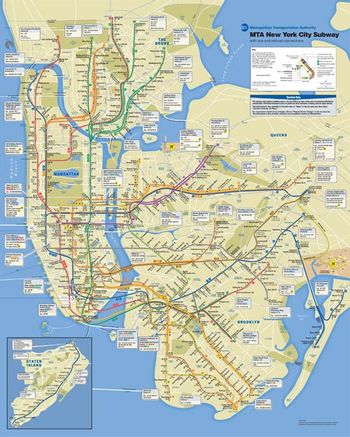 If you can understand this map, you're a New Yorker.
"Stand clear of the closing doors, please. *BING-BONG*"

Twenty-four routes, 472 stations, 5 million daily riders, 1.5 billion yearly riders (at $2.75 a pop) ...and it's in the red. Probably the most famous subway system in the world. Not the first, certainly not the best, but the one everybody seems to know. Administered by the Metropolitan Transportation Authority, or MTA. According to That Other Wiki, the subway trails only the metro systems of Tokyo, Moscow and Seoul in annual ridership and carries more passengers than all other rail mass transit systems in the United States combined.

The trope here is that the subways of New York City are hot, grimy, filthy, encrusted with graffiti, and magnets for street crime. While this was once basically true, subway cars haven't fit this bill since 1990. Some common representations, however, are true:

Another reality-impaired subway trope is that there are miles upon miles of abandoned subway tunnels beneath the city, just waiting to be inhabited by something evil. Not so much. Though, there are several abandoned stations (including one that now serves as the New York Transit Museum), as well as the infamously half-complete Second Avenue Subway, which had been on the city's to-do list for decades. It was actually first proposed in 1920. The first part finally opened New Years Day 2017.

One of the complications when discussing the subway is the distinct terminology used for the system. "Lines" in the New York City Subway refers to the physical track and the tunnels or elevated tresses they run over or through, not to the (oft-times transient) service patterns, which are properly called "routes" but most often colloquially called "trains" (as in "Take the A Train"). Although most of the system operates underground (roughly 60% of its stations), a lot of the system in the outer boroughs is run on elevated tracks, on an embankment or an open cut. Many of these elevated sections are remnants of older networks dating back to the 19th century, but mostly demolished in the 1940s and 1950s. Despite this, the whole system is still called "the subway".

In the old days, the lines were built and run by different rail companies. The first was the Interborough Rapid Transit Company (IRT) running north-south between Manhattan and the Bronx, with a later extension into Brooklyn (they also took over the pre-existing Manhattan elevateds, none of which still exist). The second was the Brooklyn-Manhattan Transit Corp. (BMT), originally called the Brooklyn Rapid Transit Company (BRT), connecting Manhattan to Brooklyn and Queens, and incorporating the old Brooklyn elevateds. These were joined by the city-operated Independent Subway System (IND) in the early 1930s; one reason the IND was built (as an almost all-underground system) was to directly replace several of the old elevateds, which were seen as a blight, causing noise and casting darkness on streets by blocking out the sun, and the whole system was unified under city administration in 1940. The stations have remained basically the same, as have the tunnels and tracks used... but unfortunately, the rival companies gave each other a wide berth, leading to a needlessly-convoluted route between Brooklyn and Queens under the 'unified' system. Also, IRT tunnels are too narrow to accommodate IND/BMT cars, so there are few convenient east-west "crosstown" lines in Manhattannote Just the 7 train and the 42nd Street Shuttle at 42nd Street, and the L train at 14th Street, and direct rail travel between Brooklyn and Queens is primarily limited to the G train by the river, and through direct travel on the A, J/Z, and M trains further eastward.

The way to tell the lines apart is that ex-IRT routes, now officially known as the A Division, have number designations (except for the 42nd Street Shuttle between Times Square and Grand Central). A Division trains also have smaller cars (51 feet long, 9 feet wide, with three doors on each side) due to sharper curves and shorter platform clearances. The distinction between IND and BMT was seriously blurred after unification by the construction of several track connections, and they are now known officially as the single B Division. The B Division routes use letter designations, as well as larger cars (60 feet long, 10 feet wide, with four doors on each side).note Some of the older B Division cars are 75 feet long, as the IND was built to handle that length of car while having the same clearance for 10-foot-wide cars as the BMT, but the older elevated eastern portions of the J, L, M, and Z routes, which are among the oldest structures in the system, cannot accommodate the longer cars, so instead of continuing to have two separate fleets for the one division, all B Division cars ordered since the 90s have been built to the same 60 foot length. The consolidation into one division has led to many lines that have substantial portions on both ex-BMT and ex-IND tracks, such as the Dnote Runs on the IND Concourse Line in the Bronx, IND Eighth and Sixth Avenue Lines in Manhattan, and the BMT 4th Avenue and West End Lines in Brooklyn, the Rnote Runs on the BMT 4th Avenue Line in Brooklyn and the BMT Broadway Line in Manhattan, then uses a track connection in the 60th Street Tunnel to use the IND Queens Boulevard Line in Queens, and the Mnote Uses the IND Queens Boulevard and Sixth Avenue Lines via 53rd Street, then uses the Chrystie Street Connection to connect to the BMT Jamaica and the Myrtle Avenue Lines, among others.

This has led to the former IRT lines still being colloquially known as "the IRT" (at least by older New Yorkers), while the IND and BMT designations are little-used outside the fandom. All three do remain as part of the official names of the lines, however. Whatever you do, do not refer to lines by color. The most famous cars that shout "New York Subway", the "Redbirds", once the canvas for graffiti artists, have all been decommissioned and used to build an artificial reef in the Atlantic. Modern cars are slightly more generic looking.

Until 1985, the MTA used single and double letters to denote the various services on the B Division. Locals were designated with double letters, while expresses had a single letter, with the idea that this would make the system amenable for visitors, who may not know or even get confused by historic or community names. The lines were also color-coded as the MTA wanted to ensure that no two services with exactly the same color would operate over the same line. It became problematic for several reasons:

Many of the new services introduced by the MTA after November 1967 were since eliminated due to redundancy or low patronage, such as the NX (which was used for a rush hour peak-direction "super-express" service along the express tracks of the Sea Beach Line), RJ (which served as a rush-hour variant of the RR 4th Avenue local, but used the Nassau Street Line all the way to Jamaica; it was later cut back to Chambers Street only; the M then took over as the Nassau Street special after the R's northern terminal was switched to Forest Hills), and the EE (which served as a replacement for the RR, which until 1967 ran to Forest Hills, but was later absorbed into the N due to budget cuts).

In June 1979, the former color scheme was scrapped, and the MTA settled on a more coherent policy of assigning the same color to every service on each Manhattan mainline, plus different colors for lines not entering Manhattan. Also in May 1985, the MTA decided to scrap the double letter system that was used since the IND opened in 1929, having realized that there were many services that were express for part of their route and local for other parts. In most cases, this was accomplished by simply eliminating the second letter in route designations.

There were several grandiose plans in the past to expand to areas that do not have subway service, notably Staten Island and eastern Queens. Though discussion remains strong to this day and provisions were built for future expansion, they never get past the drawing board for various reasons, including funding problems, not-in-my-backyard activism and changes in the overall economy. Some of these proposals included:

As you can see from the page quote, most announcements on the Subway, including the famous "Stand clear of the closing doors, please," are done by a friendly-sounding guy with a very neutral accent. Fun facts: his name is Charlie Pellett, he was born in London but moved to New York as a kid, worked hard to erase his English accent after he got teased for it in school, he's a reader for Bloomberg Radio, and yes, he rides the subway every day

Unlike many similar subway systems that use a zone system or calculate fares based on the entry and exit stations, the New York subways are flat-rate: pay once when you enter, and you can go anywhere the cars will take you, be it one stop away or to the opposite end of the city. Originally costing a nickel, it's now $2.75 for entrancenote Sort of: a single-ride ticket is $3, but a swipe from a reusable "MetroCard," the standard fare card for New York subways and buses, costs $2.75; when you put more money on a MetroCard, you also get a 10% bonus. Plus, new MetroCards cost an extra $1. Also, you get one free transfer within 2 hours, but only bus-to-bus, subway-to-bus, and bus-to-subway. And also subway-to-subway, but only at certain "out of subway transfer" stations. Again, MetroCards only, not single rides. Get all that?, with the option to purchase unlimited cards that last a set time period—7 days (perfect for visitors) or 30 days (the Commuter Standard)—instead. On top of all of that, students of New York public schools receive free MetroCards for the duration of the school year. The cards are only supposed to be used only on school days, but that rule is often ignored.

Additionally, the MTA runs a complicated system of buses, Staten Island (the Red-Headed Stepchild of New York City) has its own above-ground train line across the island, and there are several separate local rail systems primarily for commuters:

The NYC Subway is one of only five mass-transit systems in the United States that run 24 hours a day, 7 days a week, 365 days a year.note The only others are the Chicago "L" (and only on its Red and Blue Lines), PATH, the PATCO Speedline (which connects Philadelphia to its South Jersey suburbs), and Metro in the Twin Cities (and only on its Green Line). Note also that the Twin Cities Metro, unlike all the other 24/7 lines in the US, is classified as light rail instead of rapid transit. In all cases, schedules run far more frequently during the day (3-5 minute intervals on the NYC Subway) than late at night (20 minutes on the NYC Subway). The city that never sleeps, indeed.

Inevitably, any TV show or movie set in New York City has at least one subway scene. Listing all of them would just be silly. Usually, though, they are in trains found in systems outside of NY, with the stations also being fictitious (but named after actual stations). If the filming is done strictly in NYC, then you are usually treated to multiple different trains inside and outside, almost never just one.

There are several late-night shuttles that are not designated with the letter S, but use other designations instead.