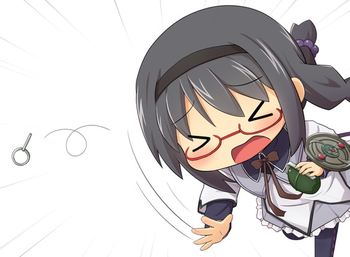 A character pulls the pin off a grenade and proceeds to throw ... the pin, and keeps the grenade in hand. Very common in cartoons.

This one often comes about due to a misinterpretation of the instruction "pull the pin and throw it." Can be considered a form of Explosive Stupidity, though examples need not involve the grenade detonating (especially in works that know the pin is a safety and the plunger lights the fuse). Likely to result in Boom in the Hand. Related to Hoist by His Own Petard. See also Pineapple Surprise.