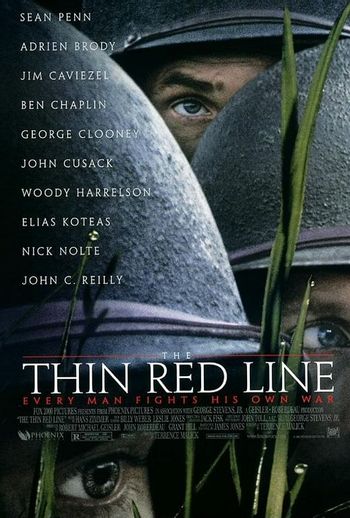 Every man fights his own war.
"Maybe all men got one big soul everybody's a part of, all faces are the same man."
— Private Witt
Advertisement:

The Thin Red Line is a famous book about the battle of Guadalcanal by author James Jones. It is a philosophical work about the internal and external battles the various soldiers go through.

It was made into a movie twice, in 1964 and 1998. The more famous of the two adaptations (the 1998 one) was written and directed by Terrence Malick, and exhibits many of his trademark directorial characteristics, including sumptuous nature photography and deep philosophizing, often by way of internal dialogues. Malick used the film to expound on the idea that "all men have got the same soul" and are part of nature, and therefore warfare is just an example of mankind fighting against himself.

The film features Loads and Loads of Characters (still more in the book) who each have their own perspectives on the battle raging around them, although most of the characters seem to be surprisingly thoughtful and articulate in their internal monologues, despite (or perhaps because) the ever-present threat of impending death.

The film is also notable for being pitted against Saving Private Ryan both at the time it came out and ever since, with the two (very different) war films being (perhaps unfairly) compared to each other and various film critics taking sides. This is owing to the fact that it depends on what kind of war movie you are looking to see.

Both movies are visceral, but Saving Private Ryan would probably be described as "action-packed" and expounding the attitude that "war is hell, but sometimes necessary, and we will never understand what the Greatest Generation went through." (It could even be said to have popularized this nostalgic approach to WWII.) Conversely, The Thin Red Line would probably be described as philosophical and immersive, expounding the attitude that men don't really know why they fight because they are part of nature, and make excuses for their violence.

Please note that this article is first and foremost about the 1998 film; examples exclusive to the novel or the 1964 adaptation will be noted as such.

See also From Here to Eternity, also by James Jones.

Tills: (Flipping the Bird) Not even once you weren’t scared?
Mazzi: And I guess you stood there like a big fat fucking hero, fuckface.