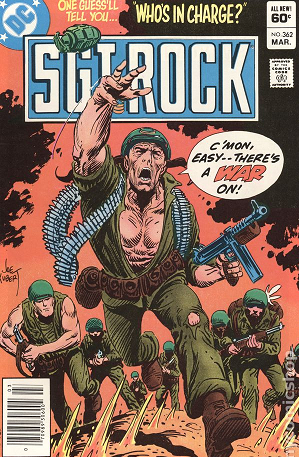 Private Cole: Why is it us? Why us?
Colour Sergeant Bourne: Because we're 'ere, lad. Nobody else. Just us.
— Zulu
Advertisement:

Sergeant Rock is a tough non-commissioned officer (NCO), usually serving in a position of leadership. The naval equivalent is either the Bosun or the Chief (depending on the organization), who usually fills the same role on a ship.

Sergeant Rock is what The Neidermeyer dreams he is. However, Sergeant Rock differs from The Neidermeyer in that he may be a bully and a blowhard, but he gets the job done while never ordering his troops to do anything he would not be willing to do himself, and thus the troops respect him, even if they're not always too fond of him personally. Also, unlike the Neidermeyer, even if he'd never tell them, he usually cares deeply about the soldiers he's in charge of. He won't say We Have Reserves, but if he needs any, he'll be guaranteed to get reserves when it matters.

If The Squad is only the size of a squad, he may be the man in charge. Otherwise, he's either helping Ensign Newbie learn the ropes, or making sure whatever Colonel Badass needs done gets done (sometimes both). Either way, he's usually a lot rougher around the edges than the officer he serves under. Whatever the situation, you can be sure Sergeant Rock is right in the middle of the firefight, whatever the odds, and whatever ordinance is being tossed around.

This trope has its roots in European military structure and class divisions, coalescing in the late 18th and early 19th centuries. Sergeant was the highest rank a private soldier could reasonably expect to get to. Therefore, any sergeant around was likely a Working-Class Hero who had come Up Through the Ranks, and, most importantly, he had come from the same place as the men in his command. Above sergeant, however, there was a career ceiling, and it was very rare for a sergeant to get promoted to lieutenant (although it did happen). Everyone from lieutenant on upward had likely bought their commission, came from the higher classes, and had never been a common soldier. High birth didn't mean that commissioned officers couldn't be badasses, but it did mean that they couldn't have this sort of relationship with the men under their command.

Has a very, very high chance of being Made of Iron and also a badass. If also intelligent and/or educated, there are good chances he will make it Up Through the Ranks as a commissioned officer. Such officers are known as mustangs, or, less favourably, "johnny jump-ups".

Named for the DC Comics character who first appeared in 1958. Rock served in the European Theater of Operations, was known for keeping his head in the ugliest situations, and for growling a lot of gung-ho sound bites. See Sgt. Rock.

Compare Drill Sergeant Nasty. The Stern Teacher is more or less the civilian version. Is the military specific version of The Reliable One.

This archetype is indeed Truth in Television, and many Real Life military forces actively encourage this kind of behavior and personality.