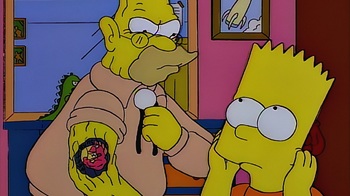 Mr. Burns sends an assassin after Grandpa when he becomes the only person standing between him and a collection of priceless paintings that the two looted during the Second World War. With Bart helping him, will Grandpa recover the paintings in time, or will Burns beat him to it?