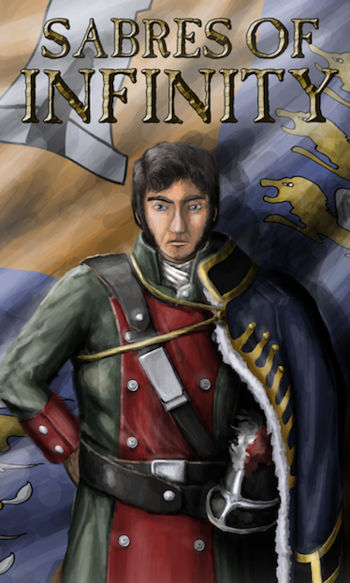 The game takes place in a low fantasy world known as the Infinite Sea, where a war rages between the protagonist's country, the Unified Kingdom of Tierra, and the League of Antar. You play as a newly-enlisted junior cavalry officer in the Tierran army, who is soon to participate in the war. Throughout the story you must make numerous strategic decisions based on your chosen skills, the ability of your selected men, and your relationships with your fellow officers. You must also make certain moral decisions centered around the war's rules of engagement. Success can be rewarded with promotions, decorations, and recognition; failure can result in obscurity, disgrace or even death.

The game is available here

A demo for the third game, Lords of Infinity, can be found here

It shares a universe with the webgame Shadow Regiment

, which takes place in a non-canon alternate future. There you play as an operative of the titular Antari resistance movement blowing up supply depots in increasingly creative ways to resist the Big Bad of both games. However, it is not considered canon for the wider universe.

You can also find a wiki for the Infiniverse, the setting of the games here.

if you are interested in the back story of the game as well as some of the deatil analysis of the universe written by Word of God.

The Dragoon Saga provides examples of the following tropes: