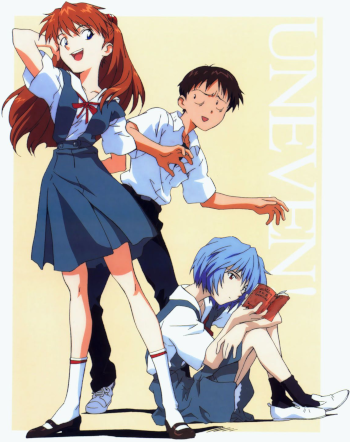 From left to right:
Asuka as Id: Brash, arrogant, quick to action
Shinji as Ego: Torn between the two of them
Rei as Superego: Stoic, unemotional, insightful
A Power Trio of the "two Foils + balance" variety, this trope has three characters playing psychological positions based on the Freudian idea of the Id, the Ego and the Superego.
Advertisement:

Freud defined the human psyche as consisting of three parts:

Likewise, the Freudian Trio consists of three characters: one who acts emotionally and instinctively, one who acts with cold, passionless logic and one who reconciles the two conflicting ideals.

Sometimes the Id/Superego dynamics play out with just two characters, but in those cases the representatives of opposing sides must learn to negotiate with each other. In a Power Trio, they are free to be more extreme, and it falls to The Kirk to lay the smack down and keep the group integrated. The leader of a Freudian Trio may not necessarily be The Kirk but often is. The second most likely to be the leader is The McCoy, the most passionate and caring one. It might be that The Hero is the emotional id, his lancer is the practical ego and The Smart Guy is superego.

Basically if The Leader is the superego he'll be the Mastermind; if the ego, most likely the Levelheaded; and if he's id, most likely the Headstrong. Each can be the Charismatic as this type leads by example.

The Evil Duo is a Foil to this arrangement consisting of two villains who show how the Trio fails to function without one of the members. The most common form is with one Id villain and one Superego villain, but an Id/Ego pair or even an Ego\Superego pair is not unheard of.

Traditionally, when it comes to the moral behaviors of the three. The Id typically leans towards the Chaotic alignments, the Ego settles into the Neutral alignments, leaving the Superego adhering to the Lawful alignments. This divide often has the Id and Superego commonly feuding one another due to conflicting standpoints. Leaving the Ego either in-between or generally not involved, with the other two.

From a tragic change in the plot, where the three are victims of a Crapsack World. The Id will more than likely become a rebellious non-conformist whose angry with how society is run. For the Superego, they instead become obsessed with taking control believing only their standards are good enough for everyone. Tragically this leaves the Ego, in many cases the worst affected. Since they're often the Middle Man, most people will either ignore or take little consideration towards their thoughts and feelings, turning the Ego in this case into an Empty Shell. This can be a very real situation.

For a more in-depth look at Freud's theories, check out UsefulNotes.Id Superego And Ego.