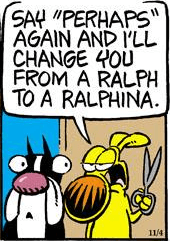 Salario: Why, I am sure, if he forfeit, thou wilt not take his flesh: what's that good for?
Shylock: To bait fish withal.
— The Merchant of Venice
Advertisement:

A threat intended to make someone sexually uncomfortable; more often than not, a character threatens (sometimes subtly) to castrate someone.

Compare Groin Attack. Crippling Castration may result if the threat is actually carried out. See also Phallic Weapon, when it's the weapon itself that has Freudian overtones.

Tifa, Cloud and Aerith threaten Don Corneo's genitals to coerce him into talking

Tifa, Cloud and Aerith threaten Don Corneo's genitals to coerce him into talking